This past weekend I spent what I considered an enjoyable time at general conference. As I noted in an earlier post, there were two major events planned in conjunction with the conference—one by Ordain Women and the other by American Atheists.

In observing the Ordain Women event and considering the way that their efforts have played out on the Internet over the past couple of months, I’ve noticed a couple of incidents of double standards at play and I thought I would address those.

Before doing so, however, I want to make something perfectly clear so that I am not misunderstood: In critiquing the tactics or approaches of Ordain Women and their defenders, I am in no way disparaging the motivations, desires, sincerity, honesty, integrity, or personalities of the people involved.

During the past 24 hours I’ve had two unrelated sisters come to me, unbidden and unrequested, to comment on the Ordain Women event and the actions by leaders of the group. In both cases they stated “these sisters must not have testimonies.”

This isn’t about testimonies, however, and I do not have the unclouded discernment to judge the hearts of those in Ordain Women. At root, this isn’t about the people or people’s beliefs; it is about what the people are doing in furtherance of their beliefs. It is not about personal virtues but about actions. While I cannot judge hearts or the intents of the heart, I can judge actions.

Further, I am not questioning or disparaging the right of Ordain Women to attempt to further their cause. I do, however, believe that there are double standards at play and they should be brought into the open and discussed.

A Double Standard Regarding Reserved Space 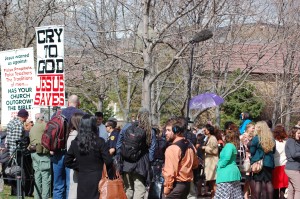 People start to gather in City Creek Park before the Ordain Women event. Note the preachers, with signs, at the left.

As I attended the Ordain Women event in City Creek Park, I noted that a few Street Preachers were in the park before the meeting began. Having talked to the preachers earlier in the day, I know why they were there—they disagreed with the idea that women should hold the priesthood, even the priesthood of a sect the vehemently disagree with (the LDS). They wanted to make their feelings on the matter known.

However, they were precluded from doing so. Ordain Women had reserved the park for their event, and the group had a permit, issued by the city, to gather and meet there. The police in attendance notified the preachers of this fact and the preachers peacefully moved out of the private space onto the public sidewalks just outside the entrance to City Creek Park.

Twice asked to desist, the group still entered Temple Square, seemingly because the ends justified the means or, put a bit differently, their cause made such action appropriate. What if the Street Preachers had refused to leave City Creek Park, feeling that their cause justified the refusal? What if other protesters followed the lead of Ordain Women and entered Temple Square because they felt their causes were equally as important as was felt by leaders of Ordain Women?

Some have tried to say that Ordain Women had a right to go onto the Church’s private property because they were more like “shareholders.” It is, after all, their tithing monies (and those of millions of other Church members) that pay for the upkeep of Temple Square.

This seems, to me, a specious argument to make in this situation because the same logic would allow others to enter City Creek Park despite the fact that Ordain Women had a permit. It is taxpayers, after all, that pay for the park’s upkeep. Did not other citizens, then, have a right to enter the park and make their feelings about Ordain Women’s actions known?

A Double Standard in Assumptions

According to at least one who marched with Ordain Women, “Our audience is the First Presidency and Quorum of the Twelve. That’s who we want to be heard by.” According to some, that intended audience has heard and has made some changes. The Church’s Public Affairs department (which is overseen by members of the Quorum of the Twelve) has certainly heard of the group, as the letter sent to the group on March 17 was signed “on behalf of The Church of Jesus Christ of Latter-day Saints.”

Ordain Women, though, is not satisfied with what it sees as incremental changes in women’s roles in the Church. Co-founder Kate Kelly has long maintained that the only success will be the ordination and advancement of women in all callings. As recently as the day of the actual event she reinforced the group’s goal:

We desire not only incremental inclusion and greater roles and responsibilities, but to be on complete equal footing with men. I have stated many times, unequivocally: we want women to serve in all leadership capacities in the church, including Quorums of the Seventy, and as apostles and prophetesses.

To many such a goal is a stretch too far, so many Ordain Women supporters have said that they simply want the Brethren to “ask God” and see if ordaining women is possible. That much simpler goal is in keeping with the very last sentence of Ordain Women’s mission statement: “We sincerely ask our leaders to take this matter to the Lord in prayer.”

Elder Dallin H. Oaks of the Quorum of the Twelve.

The assumption, of course, is that the Brethren haven’t taken the matter to the Lord in prayer. In finding fault with Elder Oak’s masterful sermon on the priesthood, one blogger going under the pseudonym “Mormon Heretic” questioned the apostle:

Have you actually sought revelation on the subject? You didn’t reference a revelation or a scripture. Have you even tried to seek revelation as President Kimball did? Maybe you have, maybe you haven’t, but could you at least tell us “yes I have prayed, and God said “no”, or “not yet” or something like that? Could you reference a scripture? You are a prophet, seer, and revelator, aren’t you? I sustained you as such in both my temple recommend interview, as well as when I raised my hand in the sustaining of church officers. Come on and throw me a bone here.

This entire reaction strikes me as rather odd. Those who support what they view as gender equality are quick to attribute to Ordain Women’s involvement changes they see as favorable but just as quick to denounce definitive pronouncements they don’t like. Here’s part of what Elder Oaks said in his priesthood session sermon:

Even though [the First Presidency and Quorum of the Twelve] hold and exercise all the keys delegated to men in this dispensation, they are not free to alter the Divinely decreed pattern that only men will hold offices in the priesthood.

If one can assume that pictures in the Conference center are due to pressure exerted by Ordain Women why cannot one assume that such a definitive statement by Elder Oaks was done after asking the Lord, as Ordain Women requested?

I’ve seen no evidence that Ordain Women’s leaders overtly advocates the use of double standards in furtherance of their cause. They could go a long way toward discouraging such usage by stopping their use within their own ranks and asking they not be used by supporters.