I decided to attend the Ordain Women event on Saturday, April 5, 2014. For those who could not attend and may be curious as to what happened, I decided to jot down my observations.

I went up to City Creek Park at about 4:00 pm, with the event scheduled to begin at 4:30. The skies were gray and threatening, and by my guess about 125 people or so had already gathered. 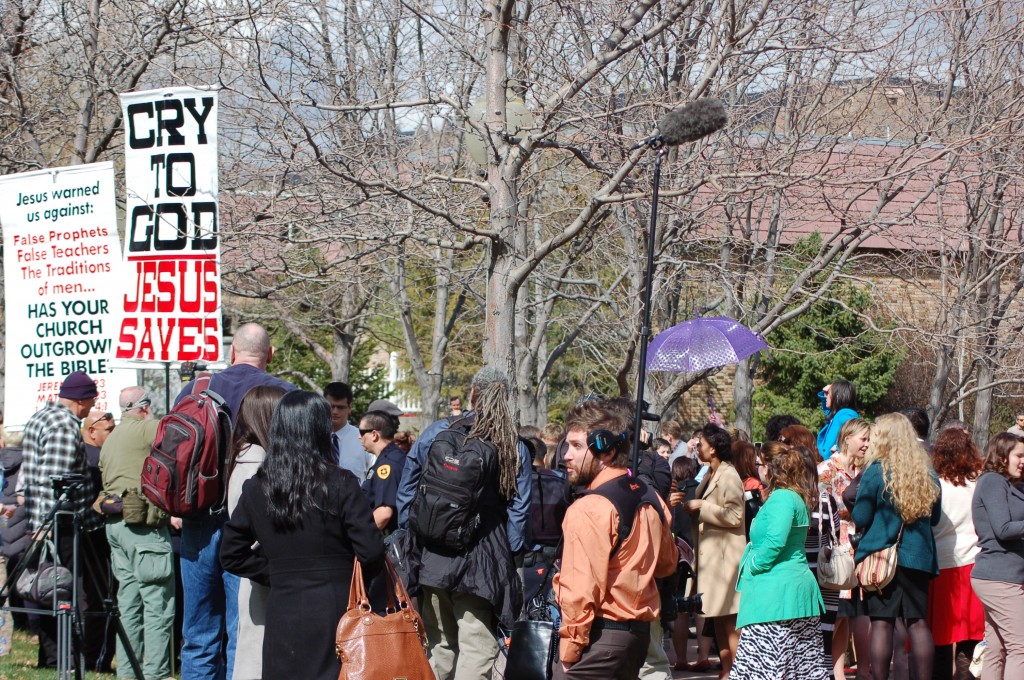 People start to gather in City Creek Park before the Ordain Women event.

It was hard to tell exactly how many were there in support of the group and how many where there, like me, simply to watch. I stood on one of the back rises so I could get some photos, and I noticed quite a few journalists and news photographers there.

At about 4:20, a spokeswoman took the microphone and asked for the group’s assistance in finding a lost young boy. The microphone was connected to a portable PA system, and it was clear that it was under-powered for the outdoor venue—she was very hard to hear. 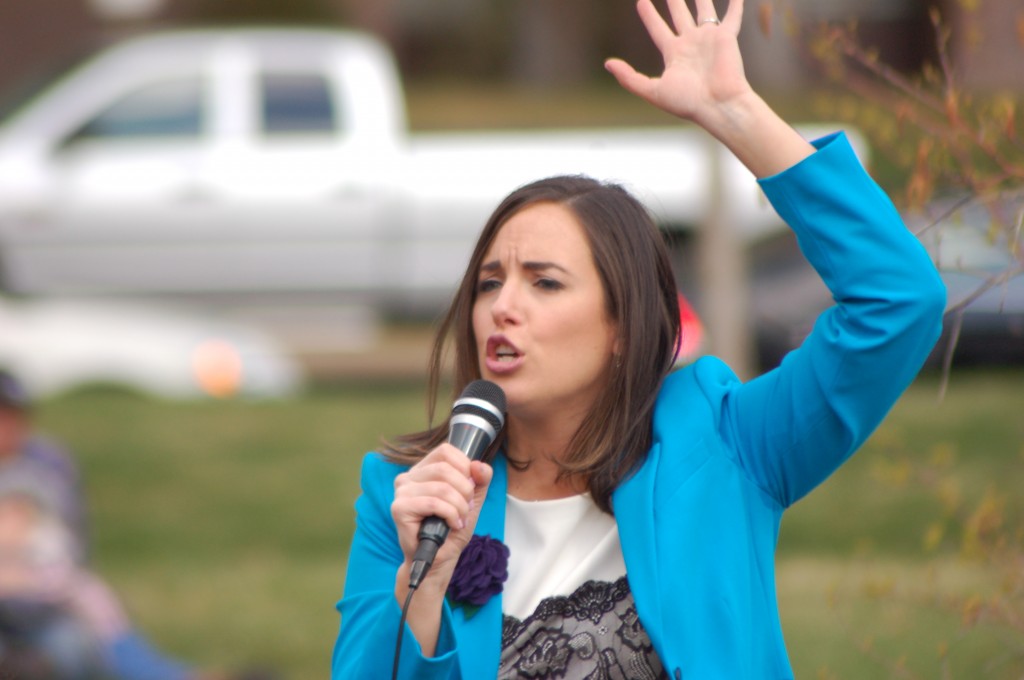 Making an announcement about a lost child and asking for help in locating the boy.

The gathering came to order at 4:30, and I estimate there were no more than 300 people there. (They Ordain Women folk were doing what they could to determine attendees, including having members with clipboards going through the crowd and asking people to sign up.) The group was asked to sing a song. The one chosen was Come, Come Ye Saints. The request was to sing the first and last verses. The last verse was specifically requested because “I fully expect women to have the priesthood in my lifetime, but if they do not, the final verse gives me hope.” (That is not an exact quote, but a paraphrase of the explanation.) 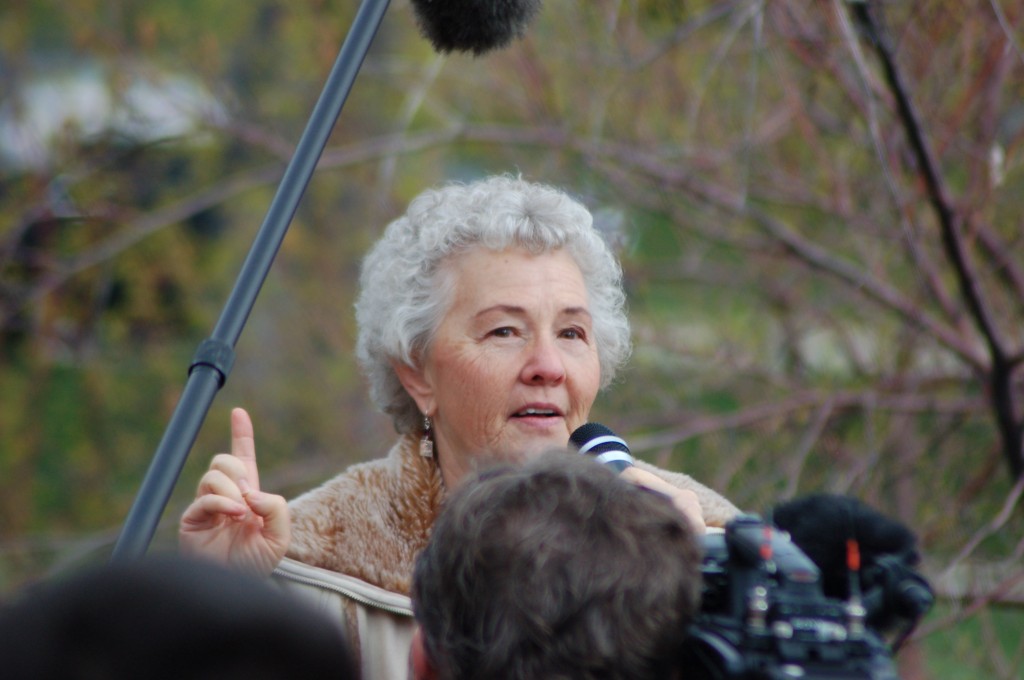 After the song an opening prayer was offered, and then the group listened (or, again, tried to listen—the PA system was totally inadequate) to some words by Ordain Women’s leaders. 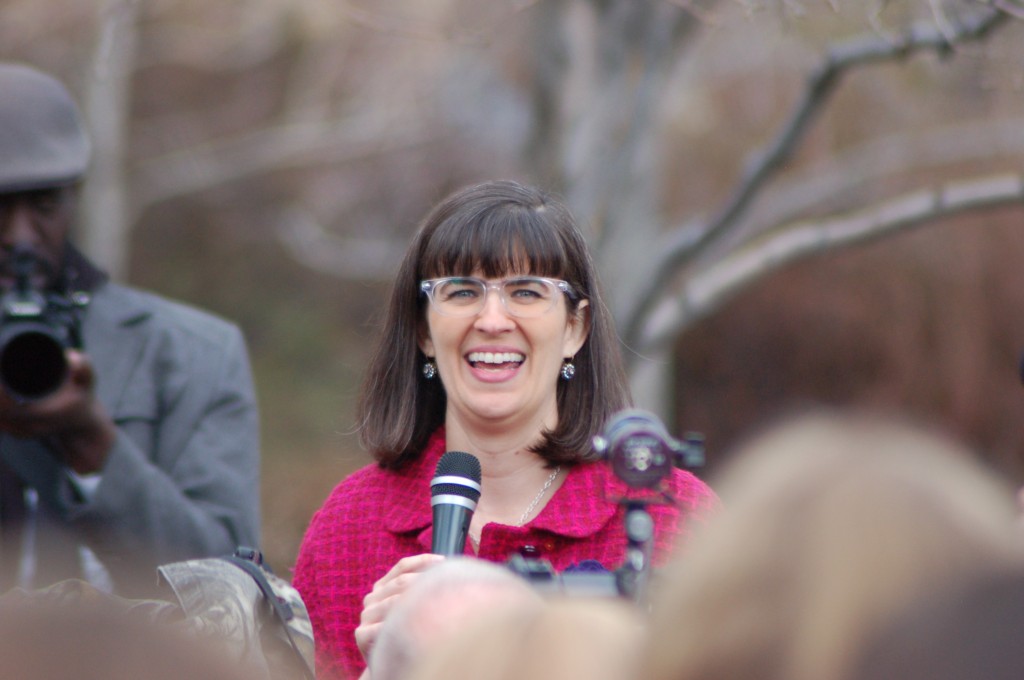 The march started at about 4:50 or so. The group moved out of the park and along State Street. From what I could tell they entered Temple Square from the Northern entrance abutting the Church Plaza.

There was an interesting thing that happened during the actual march—a freak Spring storm rose up and dumped a lot of pea-sized hail and rain on everyone. My suit was soaked and my suit coat pockets and hair were filled with hail. On Temple Square, outside of the Tabernacle, the hail was forming “banks” for water that was running along the walkways.

A friend that was with me said “I’m not one for ascribing freak weather events to divine providence, but this one comes close.”

The Ordain Women group arrived on Temple Square and moved toward the standby line, stretching counterclockwise around the Tabernacle from door 15. In the proximity of Temple Square and in single file against the Tabernacle, the group looked larger than what it had in City Creek Park. I attribute that to oddities of venue, however, as I have no doubt some of the participants did not make it through the heavy storm and the many journalists and photographers that were at City Creek Park were no longer with the group. 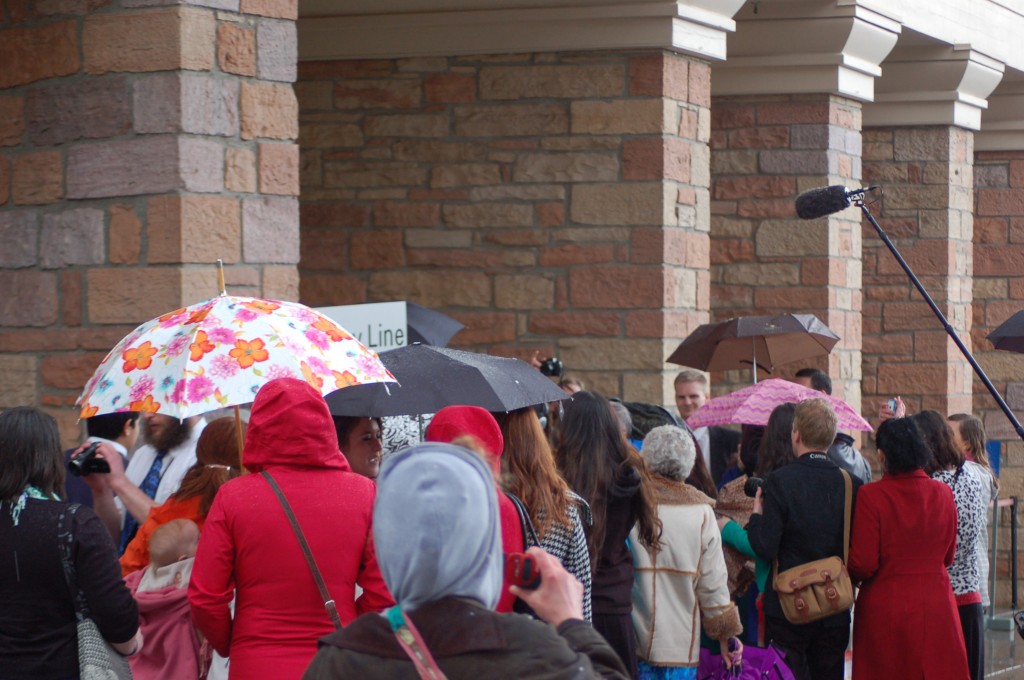 Ordain Women supporters and others cluster around the Tabernacle’s door 15 at the head of the standby line.

That being said, there were one or two reporters, but I could not tell which media outlets they were with. (The give away was the large professional-grade camcorder and the shotgun microphone on a boom.)

The Ordain Women members came to the front of the standby line and were greeted by a sister. I did not see a name tag, but I suspect she was with the Church’s Public Affairs department. 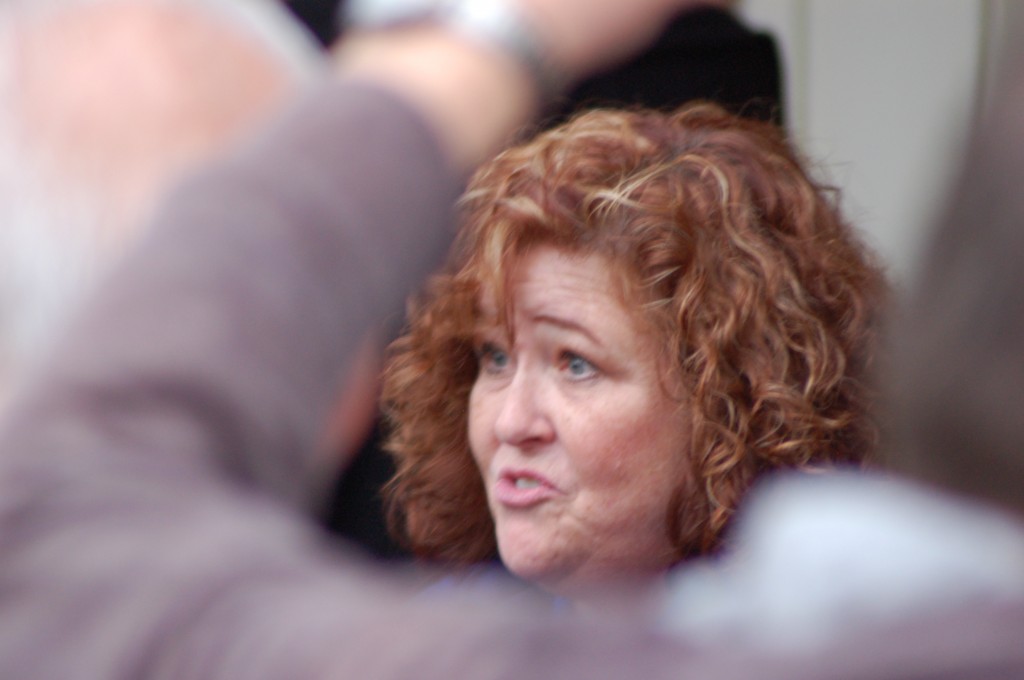 A Church official takes time to greet each of the Ordain Women members individually.

I took a few pictures and, while I was there, I was approached by several other people on Temple Square (a total of three) who were curious as to what was happening. It was clear to them that a “disturbance” (something out of the ordinary) was occurring, but they had no idea exactly what it was. I informed them that it was an event organized by Ordain Women to express their desires to receive the priesthood. My answer was accepted, in all cases, with a simple shrug of the shoulders and “OK.” Then the people went back to their normal activities on Temple Square. 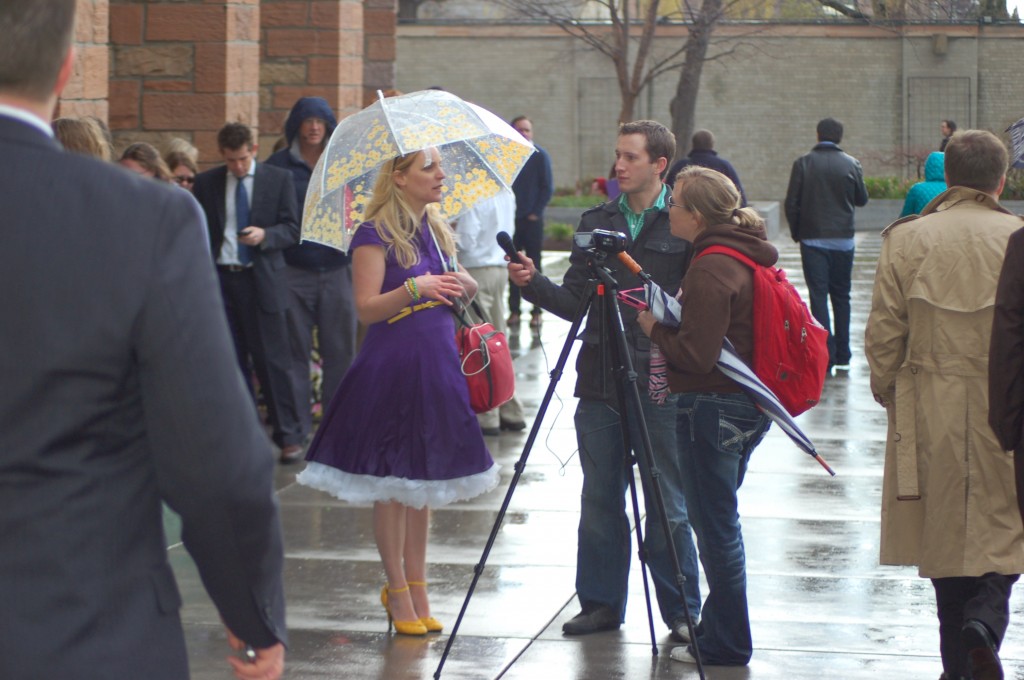 Interviews going on outside the Tabernacle

I spied a few people I know standing in line (like Dan Wotherspoon from Sunstone magazine) and finally left at about 5:25 pm. The standby line was quite long, and the Church’s representative was taking time to talk with each person in the group individually and turn them away from the doors.

While I was observing, I could see no disrespect, no “body language” that betrayed ire or ill-will on either side. I cannot comment on anything that may have happened after I left Temple Square.

One thought on “The Ordain Women March on Temple Square”