As a person fast approaching the magic “at risk” age, I choose to not wear a mask. I know that will drive some of my friends in larger urban areas absolutely nuts. Let me say up front that I am only talking about my decision, for me. I am not trying to tell you what you should do. I’m assuming, sometimes against evidence, that you have a brain and can make your own decision for what is best in your own life.

I will also admit that some of my friends, particularly those in large urban areas, will go nuts with this statement of decision. I expect to see vitriol in the comments on this post and on Facebook. So be it. Remember, though, I’m not telling you what you should do. I will respect your decision. If you find it impossible to respect mine, then perhaps you should look at your reaction to my decision instead of my actual decision.

I should also point out that our county is sort of bifurcated. Well over half of the population lives 38 miles away, in Evanston, on the Wyoming/Utah border. That is where the vast majority of COVID-19 cases have been. We’ve had a few in Bridger Valley (where I live), but to the best of my knowledge you can count the number of cases on a single hand. 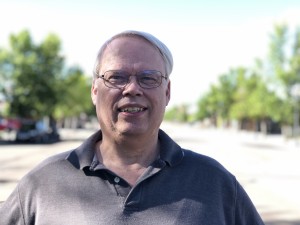 This is me, standing in the middle of Main Street (on the double-yellow line) at 5:35 pm on a recent Friday evening. It is not an understatement to say there is no rush hour in our town.

This is my reality. This is what I have lived with since the pandemic broke out. I don’t live in an urban area. We have no Wal-Mart or Piggly Wiggly nearby. There is one bar in my town, a block away, and I think over the past four months, I’ve only noticed one time when the number of patrons may have gotten above ten. We don’t even get the mail delivered to our house, for goodness sake. We are already, by all definitions, socially distanced. Always have been.

Yet, I have Facebook friends who make asinine comments regarding my decision not to wear a mask. Perhaps the most asinine is telling me that somehow, if I don’t wear a mask, I don’t care about others. I’ve heard it time and time again. Just yesterday I saw someone say “You wear a mask because you are considerate of others. Or you don’t. Because you’re not.”

I know that these people may be well-intentioned, but they really aren’t thinking before they speak. I know they cannot read minds, yet they are assigning motive to my actions. In other words, they are saying that because I don’t wear a mask, I am telling them — signaling to them — that I don’t care about them. They are telling me that they need me to signal, to them, my care and concern.

Well, let me tell you flat out. I do care. I am concerned. And I do not believe that I must wear a mask to signal that care and concern. If you decide you want to wear a mask, you go right ahead. It is supposedly still a free country, and I have no problem with you exercising that freedom, even though you may have a problem with me exercising mine.

What I won’t do is wear a mask in public just because you believe I must do so. You are not in a position of authority over me, and until you are in such a position, I don’t have to listen to you any more than you have to listen to me. That is called freedom.

Now, I do want to address the science behind wearing or not wearing a mask. You see, I don’t want you to make the mistaken assumption that I choose not to wear one just because I live in an area where the coronavirus is virtually non-existent or because of a lack of government requirement or out of some philosophical exercise of personal freedom. In my personal decision-making process there is also a medical component.

To say that the debate regarding the efficacy of wearing masks is scientifically settled is, at best, premature; it isn’t settled. And, yes, I’ve seen all the cute memes and bumper-sticker statements of belief people post on Facebook. I’ve seen them both pro and con. They carry no weight, and I believe anyone who relies on them as a basis for their decision is shallow and, honestly, intellectually lazy—pro or con. They may make you feel good to post, but they don’t constitute a reasoned argument.

I also won’t generally listen to doctors on this matter for a very simple reason—there is no consensus. You can literally line up dozens of doctors who advocate for wearing masks and dozens who say it does no good. Literally. And where does that leave you? I’ll tell you where it leaves all of us—still with a personal choice to make.

Let me give you an analogous example. What do you do when you go to one doctor and he says “you need an operation?” Good practice says that you get a second opinion. So, you go to another doctor who says “you don’t need an operation.” What do you do then? You may go to a third, a fourth, a fifth, or as many doctors as you want. Why? To gather information so you can make your own decision. And then you make the best personal decision you can based on all the information available to you.

So, in the case of masks, I choose to skip the dueling doctors and go to the World Health Organization. To my understanding, they have access to the best and brightest in the world. According to them, in public advice given earlier this month (available here), they said “there is no direct evidence on the effectiveness of universal masking of healthy people in the community to prevent infection with respiratory viruses, including COVID-19.” The world’s premiere health organization flat-out says there is no direct evidence. None.

So, there you have it. My choosing to not wear a mask doesn’t mean I haven’t thought it through. I have, from multiple angles, and I hope you think through it, too. If you come to a different decision than I do, great. Don’t be a jerk, though, and tell someone they “don’t care” about others by not wearing a mask. That is a facile attempt at manipulation by guilt. I promise I won’t tell you that you are right or wrong in what is ultimately a personal decision, and I would appreciate it if you would do the same.

4 thoughts on “I Choose Not to Wear a Mask”