In conjunction with the annual conference of The Church of Jesus Christ of Latter-day Saints, the American Atheists decided to conduct an event inviting people to resign, in mass, from the Church. I attended the event to document it (not to resign), and decided to record my observations.

The American Athiests issued a recent press release about this event, citing a similar event they conducted two years ago at which they said there were 100 people in attendance. They were hoping for more attending this one, but according to my count there were about 70 people when the event started and a few less than that (67) actually marching. (More on the march in a minute.) The only press that I noted was a videographer from KUTV (Channel 2) and a reporter and photographer from, I believe, the Deseret News.

Group attendees mingle prior to the beginning of the American Atheists mass-resignation event.

There were a very limited number of signs prepared for the march; I counted only two. I thought it very interesting that one of the signs mocking temple garments had a domain name tagged on the end of it for MormonThink.com, supposedly a site “produced primarily by members of The Church of Jesus Christ of Latter-day Saints,” but in actuality a website highly critical of the LDS Church. 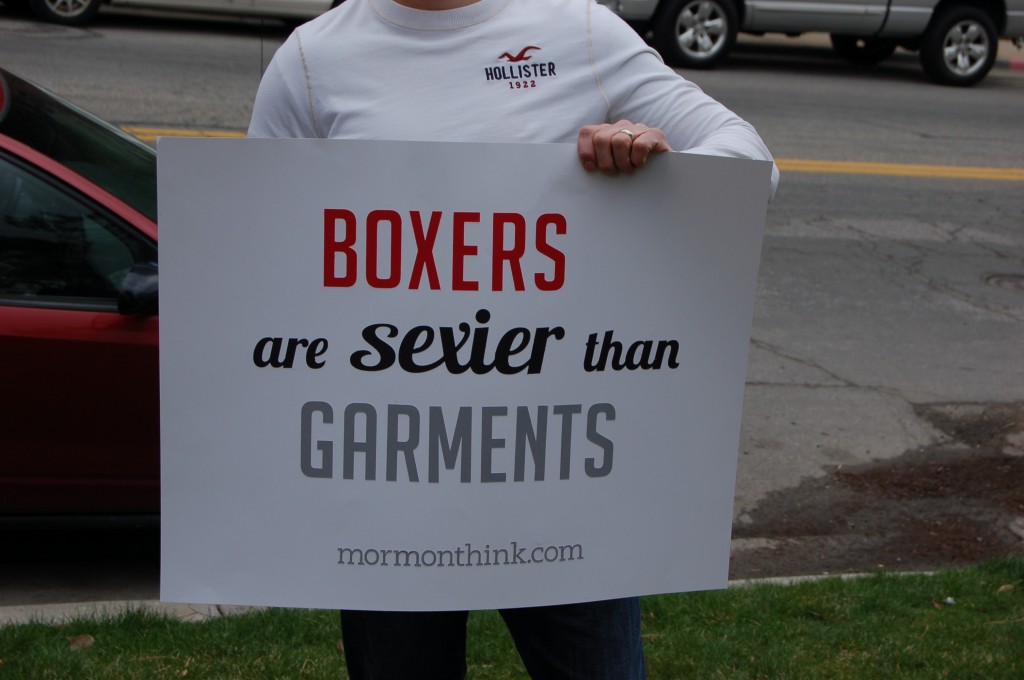 Mocking is often stock-in-trade for those critical of others’ beliefs.

The event was supposed to begin at 11:30 am with remarks by Dan Ellis, President of Atheists of Utah. It actually started at about 11:40 with Dan making comments about enabling people to come out of the intellectual bondage in which they were “indoctrinated.” (His words, not my paraphrase.) He then asked participants to be pleasant and cheerful as they passed people while marching because they wanted to show others that it was possible to be happy without a belief in God. 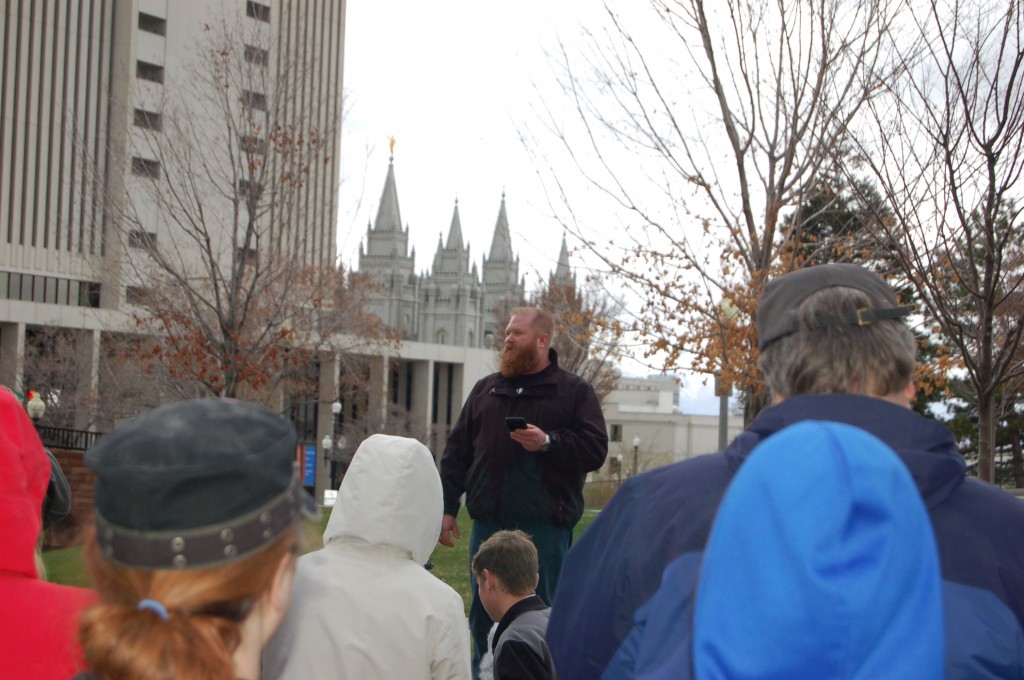 Dan Ellis, President of Atheists of Utah, shares a few remarks with those gathered around him.

Dan’s comments lasted a very short time and then the march began at approximately 11:45. The group marched down North Temple street, heading directly for the crowds surrounding Temple Square and attending conference. 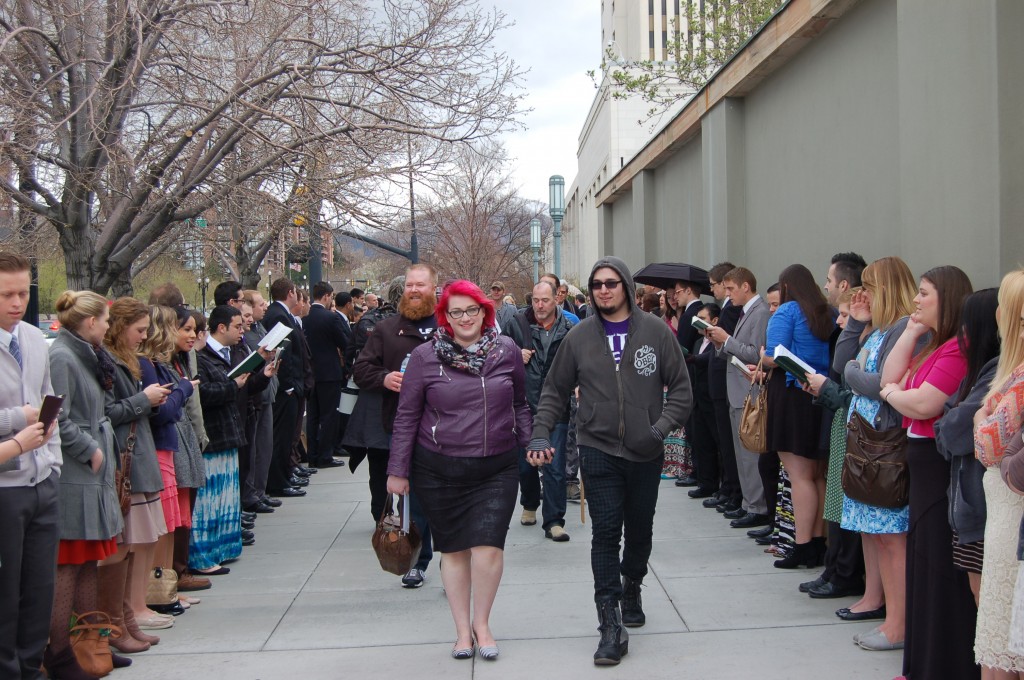 Atheist marchers walk between those singing Church hymns in the free-speech zones along North Temple Street.

The march continued westward and then turned onto West Temple. They rounded the corner onto South Temple and continued eastward past the Joseph Smith Memorial Building.

I expected more interaction as the marchers passed the Street Preachers, but while there were some loud calls to repentance, only one preacher took up with the marchers, forcefully telling them what the Bible said.

As one might imagine, the atheist marchers were unimpressed with what the preacher was saying and uninterested in what the Bible had to say. There was plenty of mocking from the marchers, with every mention of God or Jesus being met with jeers and laughter.

One of two signs carried by the atheists as they marched around Temple Square.

For some reason, I found it interesting that the marchers passed, on their journey, four homeless panhandlers. None of the marchers provided any relief to the pleas of the beggars.

Just east of State Street, the group encircled two mail boxes and made great drama out of depositing their resignation letters. There were a total of 34 letters deposited in the mail boxes, each one met with a round of applause and arms upraised in victory. 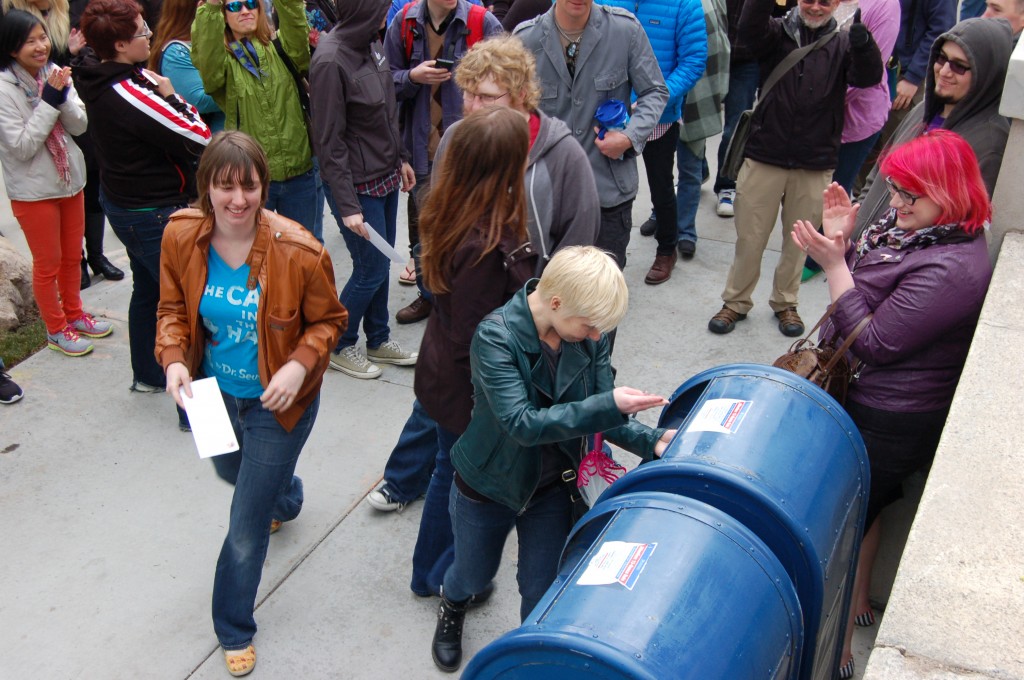 Following the mailing of the letters, the group returned to City Creek Park where they were addressed by David Silverman, President of American Atheists.