I enjoyed general conference earlier this month, and in fact wrote a good deal about it and the goings-on by other groups at conference time. One of those groups is Ordain Women, which sponsored an event designed to heighten awareness of those who would like to see women be ordained to the priesthood.

That event occurred on Saturday afternoon, shortly before the start of the general priesthood meeting. (It is this meeting into which members of Ordain Women and their supporters sought admission, as a symbol of their desire to be ordained.) It is not insignificant that the first speaker at that meeting was apostle Dallin H. Oaks, who delivered an address entitled The Keys and Authority of the Priesthood.

Among many great points made in that address, Elder Oaks stated the following:

The divine nature of the limitations put upon the exercise of priesthood keys explains an essential contrast between decisions on matters of Church administration and decisions affecting the priesthood. The First Presidency and the Council of the First Presidency and Quorum of the Twelve, who preside over the Church, are empowered to make many decisions affecting Church policies and procedures—matters such as the location of Church buildings and the ages for missionary service. But even though these presiding authorities hold and exercise all of the keys delegated to men in this dispensation, they are not free to alter the divinely decreed pattern that only men will hold offices in the priesthood.

This seemed to fully shut the door to those who would like to see the Brethren extend priesthood ordination to women. Pro-ordination bloggers sought for ways around the statement, often straining at gnats and swallowing camels (to paraphrase an old adage).

It is not my desire to address each and every one of those bloggers. Indeed, I’m happy to allow them, for the most part, to try to parse words which seem rather clear, especially when coming from a person such as Elder Oaks who is historically precise and accurate in his choice of words.

The thing that amused me, however, was that bloggers weren’t the only ones attempting the parsing. At least one person decided that the best way to make their point was with a graphic that ostensibly compared the 1967 words of N. Eldon Tanner and the 2014 words of Dallin H. Oaks. 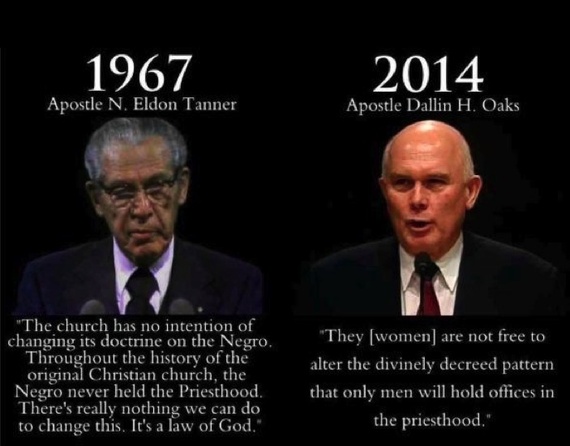 It was this graphic that drew my attention and curiosity. I thought that the use of both quotes was worth investigating.

According to the graphic, this is what President Tanner said:

“The church has no intention of changing its doctrine on the Negro. Throughout the history of the original Christian church, the Negro never held the Priesthood. There’s really nothing we can do to change this. It’s a law of God.”

If you search for the quote on the Internet, you quickly find out that it wasn’t from a general conference address. In fact, you never find the original quote at all. Instead, you find references to the quote, primarily in anti-Mormon sources.

N. Eldon Tanner, a member of the First Presidency who finally signed the statement granting blacks the Priesthood, was completely opposed to the idea in 1967:

“The church has no intention of changing its doctrine on the Negro,” N. Eldon Tanner, counselor to the First President told Seattle during his recent visit here. “Throughout the history of the original Christian church, the Negro never held the priesthood. There’s really nothing we can do to change this. It’s a law of God.” (Seattle Magazine, December 1967, p, 60)

The bold type was in the quote as used by the Tanners. (In their usage it was actually bold and italic.) Note that the Tanners do provide a source for the quote: an article in a regional magazine from Seattle. It also gives the impression that the quote was given to “Seattle,” meaning the city. (In other online sources, the quote was supposedly made to a stake conference in Seattle.)

With so much confusion, I went back and requested a copy of the original Seattle Magazine article from which the quote was pulled, as I wanted to check the context of the quote. (The Seattle Public Library was very helpful in this regard.) Here’s the original quote, in context, from an article entitled “The Swarming Mormons” (Seattle Magazine, December, 1967, pg. 54-71):

The exclusion of Negroes from the priestly orders, and therefore, according to Mormon doctrine, from advancement in the afterlife, is based on a passage in The Pearl of Great Price, a sacred Mormon scripture, which states that Negroes, as sons of Ham, are “cursed … as pertaining to the priesthood.” Most Mormons are content to let it go at that. “The subject of the Negro,” says Dr. F. Arthur Kay, president of the Seattle Stake, “simply never comes up.” For a growing body of dissenters, though, this doctrine has become the main symbol of the church’s social backwardness—and a potential threat to the presidential hopes of George Romney.

“The crux of the matter,” writes Samuel Taylor in Dialogue, “is not that the Negro has been denied the priesthood, but that the entire national ferment during the past decade concerning the equality of man has been ignored.”

Adds Dr. Sterling Stott, who is director of pupil personnel services for Seattle Public Schools and who left the Mormon Church to become a Unitarian: “The church’s leaders have simply withdrawn from the problems of contemporary society. They’re fiddling while the country burns.”

Even such harsh criticism has done nothing to budge Mormon officials from their adamant position. “The church has no intention of changing its doctrine on the Negro,” N. Eldon Tanner, counselor to the First President, told Seattle during his recent visit here. “Throughout the history of the original Christian church, the Negro never held the priesthood. There’s really nothing we can do to change this. It’s a law of God.”

There were lots of things factually wrong in the Seattle Magazine article, which should be evident simply from this excerpt. I won’t go into all those things here. (All right, maybe just one: That reference to “First President” is made throughout the article. At the time of the interview, President Tanner was second counselor in the First Presidency, with David O. McKay as President. If a reporter cannot get that simple fact right, how could one expect him to get the nuances of Church belief correct?)

Errors aside, President Tanner was correct in his statement: There was nothing “we” (the Church leaders) could do to make the change. However, it goes without saying that God can do whatever God wants.

The way the quote was used in the graphic, however, was definitely incorrect. President Tanner was not speaking at general conference or a stake conference. The quote was copied and slightly altered from an online anti-Mormon source.

According to the graphic, this is what Elder Oaks said:

“They [women] are not free to alter the divinely decreed pattern that only men will hold offices in the priesthood.”

I won’t repeat Elder Oak’s quote here, as I already included it earlier in this post. If you compare the quotes, however, you’ll see that the author of the graphic was incorrect in his or her usage of the quote. The antecedent of “they” isn’t “women.” It is the “First Presidency and the Council of the First Presidency and Quorum of the Twelve.” In other words, the quote isn’t about a limitation on women, but a limitation on the Brethren who those women sustain as prophets, seers, and revelators.

This concept—that those at the very “top” of the Church—are limited in what they can do in relation to the Church is a foreign concept to many. That is why Elder Oaks went to great lengths to make the point clear in his address.

Does the misuse of Elder Oaks’ quote by the graphic’s author matter? To the majority of those viewing it, it probably doesn’t. But it does call into question whether the author understands the larger point that Elder Oaks was trying to make.

I found the graphic funny, if not terribly enlightened. It makes a point in a ham-fisted manner, forcing a quote given to a reporter into juxtaposition against a quote given in general conference. We have no way of knowing if the reporter for Seattle Magazine got the wording of President Tanner correct 47 years ago, but we do know that the graphic’s author got the wording of Elder Oaks incorrect and misunderstood Elder Oaks’ statement.

Even so, is the point that is made by the graphic correct? Can the Church make a change concerning ordaining women because it made a change over a generation ago about ordaining blacks? According to some who reported on the graphic, such a change may be still possible. Here’s how The Atlantic summarized and used the graphic:

The Church kept away video cameras from OW’s ticket ask on Saturday. But within a day, a force more powerful than TV news—mighty social media—had already spread a poignant message. It’s simple, and it comes in the form of a meme: side-by-side quotes from LDS Church leaders 47 years apart. The gist? Never say never.

Again, the graphic was funny. But it also compared two things that weren’t equal. (A second-hand quote through a reporter to a first-hand quote from general conference.) It pulled a quote from anti-Mormon sources without checking against the original. It entirely missed the point being made by either person.

For a reporter to say that such efforts constitute a “poignant message” seems to miss so much of reality. No doubt the graphic will keep making the rounds. After all, bumper stickers are always funnier and easier to repeat than actually understanding what is going on. But poignant? I don’t think I would have used that word, and I’m not sure that a reporter would use it if she understood where its pieces came from and how they were mashed up.

I just figured that people would want to know where the information in the graphic really came from.