In attending conference this year, I thought I would simply share a few quotes that “speak” to me and thoughts that occur to me during the sessions. I’ll be updating this post throughout Saturday and Sunday.

This has to be one of my new favorite quotes, just uttered by Elder Holland during his talk in the Saturday morning session:

Sadly enough, my young friends, it is a characteristic of our age that if people want any gods at all, they want them to be gods who do not demand much, smooth gods who not only don’t rock the boat but don’t even row it, gods who pat us on the head, make us giggle, then tell us to run along and pick marigolds. Talk about man creating God in his own image!

Christ-like love is the greatest need we have on this planet in part because righteousness was always supposed to accompany it. So if love is to be our watchword, and it must be, then by the word of Him who is love personified we must forsake transgression and any hint of advocacy for it in others. Jesus clearly understood what many in our modern culture seem to forget: that there is a crucial difference between the commandment to forgive sin (which He had an infinite capacity to do) and the warning against condoning it (which He never ever did, even once).

I found the remarks by Elder Rasband to be quite touching as he recounted his experiences incident to the tornadoes that hit Oklahoma last year. It brought back to my mind the tornadoes I’ve witnessed and been through. Scary times, to be sure, but times in which one can find great examples of hope, service, and love. Well done and well articulated, Elder Rasband!

The remarks by Elder Andersen in the Saturday morning session were great. I am sure that his comments about same-sex marriage and same-sex attraction will be twisted and turned by those who oppose the moral stand which he took. I especially appreciated his inclusion of the story about the e-mail he received from a Laural (young woman 16 to 18 years old). 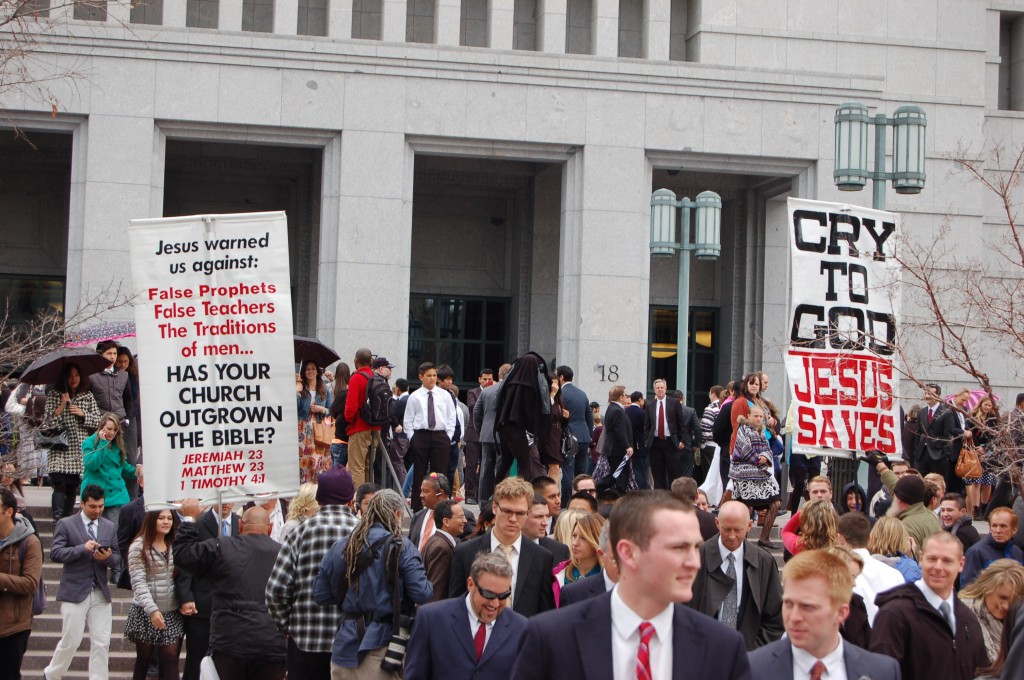 The free-speech zones that line the streets around Temple Square are inhabited by people of all sorts. The people lining the sidewalk here are in a free-speech zone, and they are singing LDS hymns. 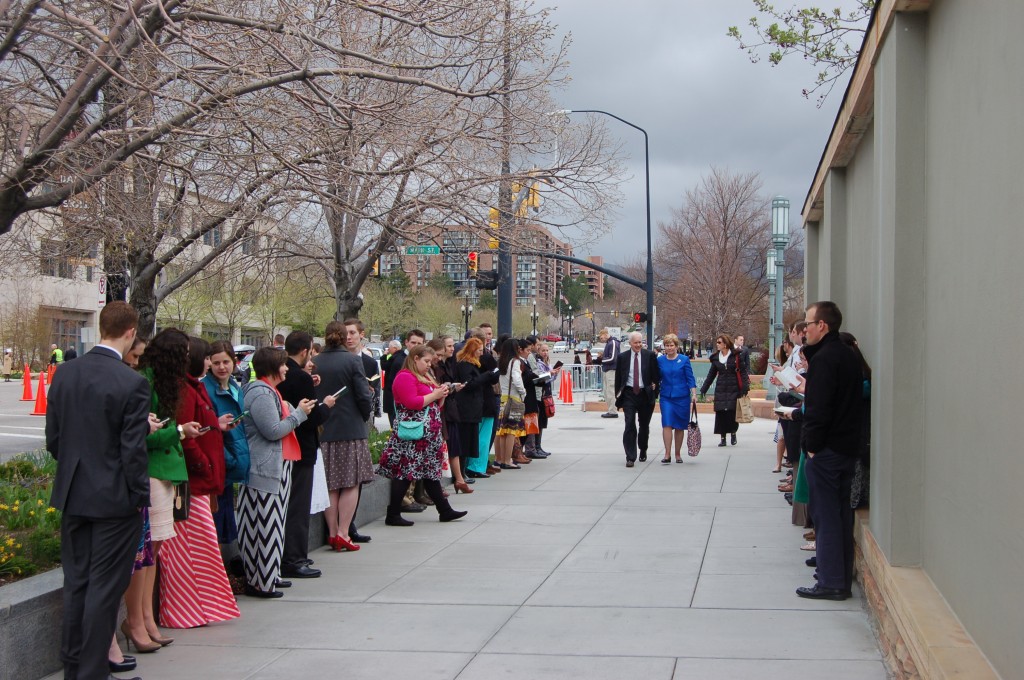 I’m now getting ready for the Saturday afternoon session; more to come!

This thought by Elder Nelson in the Saturday afternoon session spoke to me, as I’ve often worked, talked, and (sometimes) sparred with those who value academic pursuits:

In all professional endeavors, rigorous standards of accuracy are required. Scholars cherish their freedom of expression. But full freedom cannot be experienced if part of one’s knowledge is ruled “out of bounds” by edicts of men.

The reason it resonated with me is that I’ve seen the argument many times that religious experience or professions of faith have no place in academic pursuits or publications.

Here, as well, is another good quote from Elder Nelson’s talk:

Problems abound because the world is populated by imperfect people. Their objectives and desires are heavily influenced by their faith, or lack of it. Many put other priorities ahead of God. Some challenge the relevance of religion in modern life. As in every age, so today there are those who mock or decry the free exercise of religion. Some even blame religion for any number of the world’s ills. Admittedly, there have been times when atrocities have been committed in the name of religion. But living the Lord’s pure religion, which means striving to become a true disciple of Jesus Christ, is a way of life and a daily commitment that will provide divine guidance.

The personal story shared by Elder Scott about his grandmother and the influence she had on his life, even though she lived 2,500 miles away. I found it pertinent (and encouraging) to my efforts to influence the faith and strength of my own grandchildren.

I greatly enjoyed the very personal story that Elder Zwick used at the beginning of his talk. It set the mood perfectly for great instruction about the importance of not succumbing to “corrupt communication.” (It was also interesting that Elder Zwick was apparently not above “driving truck” in his career.) I love this all-too-true turn of phrase:

Each of us, though covenant children of a loving Heavenly Father, have regretted jumping headlong from the high seat of self-righteous judgment and spoken with abrasive words before we understood a situation from another’s perspective.

You can find my observations about the planned Ordain Women event here.

You can find my thoughts from Sunday’s conference sessions here.