Those who have been to General Conference have no doubt seen the street preachers who stand in public access areas adjoining Church property and shout their message, taking advantage of the protections offered by the free-speech provisions of our Constitution. Their message typically is not about the saving grace of Jesus Christ, but mischaracterizations about the LDS faith and our beliefs. They are quick to condemn and consign their listeners to hell, doing so (they believe) in the name of Christ.

The contrast between the message preached by the street preachers and the messages delivered inside the Conference Center could not be more striking. 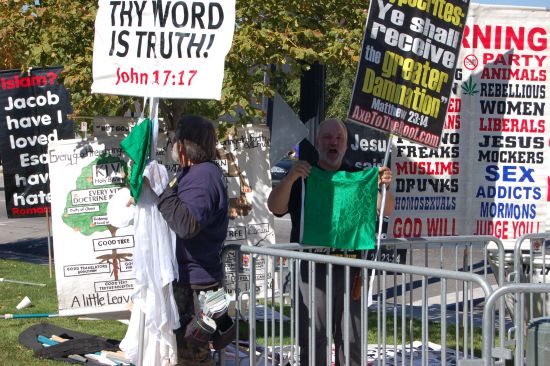 The above picture shows a common site, with two street preachers shouting, at the top of their lungs at the same time, about Mormons and the errors of their ways. The preacher on the left has a full collection of temple clothing–including garments–that he would pull out from time to time and mock. The one on the right is in the middle of mocking the ceremonial apron from the temple clothing. He proceeded to put it around his face, like a bandit would, and then around his neck, wearing it like a cape. He then accused Mormons of trying to be superheros.

Their actions–which are engaged in all the time during their preaching–should be eschewed by all those who hold anything in life sacred. I’m not just talking about things that are sacred to the LDS, but things that are sacred to any religious person of any denomination. There is a very good commentary by Mohamed Ghilan, a Canadian Muslim, where he recently addressed mockery. The main point, I believe, is well and justly made:

Such behavior, of course, should never be in the arsenal of a person who claims to be disciple of Christ or a preacher of His gospel. 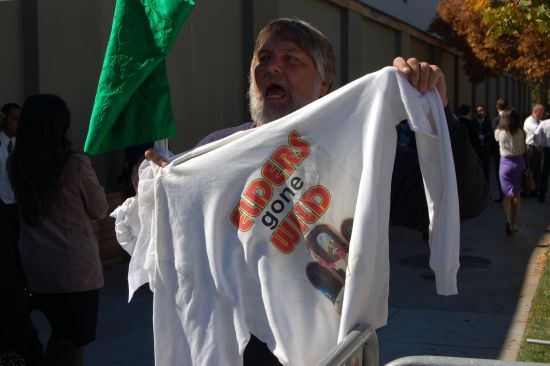 You may not be able to make sense of the graphic on the shirt, but under the heading of “Elders Gone Wild,” there is a picture, captured in 2008, associated with three disrespectful Mormon missionaries. In the words of an Associated Press reporter in a USA Today story, the photos “showed three Mormon missionaries mocking a Catholic shrine and holding the broken head of a statue of a saint” at the shrine. The incident prompted a formal apology by the LDS Church (mocking is not what we do and the missionaries were flatly wrong) which was subsequently accepted by the Catholic Church.

Mockery is not appropriate for any disciple of Christ.