In this post I’ll try to do some real-time blogging about this session of Conference. (Go easy on me; this is my first attempt at this.) I’ll update this post throughout the session. I may not have notes here from all speakers, and not all comments may be from inside the Conference Center.

Feel free to leave comments if you desire. I’ll try to answer them as (and if) I can.

There is “no proclamation more relevant, no responsibility more binding, no instruction more direct” than the command to do missionary work.

General Conference speakers are not assigned specific topics; they seek to speak as the Lord would have them speak. The same should occur in ward and stake conferences.

We make a serious mistake if we assume that conference is above the intellect and spiritual sensitivity of young people.

When taking notes in conference, Elder Hales doesn’t always write exactly what the speaker said. (Sounds like blogging. 😉 ) Instead, he notes the personalized direction the Spirit is giving to him. “What is said is not as important as what we hear and what we feel.”

The greatest blessings of conference come after the conference is over. 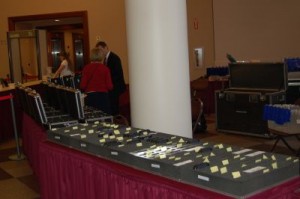 A portion of the translation equipment distributed freely to members attending General Conference.

97% of Church members can hear conference messages in their own language. General Conference reaches 197 countries in 95 languages.

Elder Ulisses Soares: Be Meek and Lowly of Heart

“As we take Christ’s name upon us, it is expected that we strive to emulate His attributes and change our character to become more like Him each day.” The attributes of God come to us as we use our agency righteously.

Great thought: “Meekness does not mean weakness.” I (Allen) believe that the world generally sees meekness as weakness and as synonymous with submissiveness. Tis not so!

Meekness also requires learning how to control our temper–a hard task for many people, to be sure.

The story of Brother Moses Mahlangu would make a great addition to the BlackLDS website. Faithfully sitting “outside the window” for about a decade. Wow!

“When a stake president or bishop is released, he joyfully accepts his release” and in future callings “he is not overshadowed by his pervious experience.” This sentiment parallels my personal experience exactly.

There is something gratifying in having a general authority from Zimbabwe recount stories of the early American pioneers leaving Nauvoo.

Elder David A. Bednar: The Windows of Heaven

Good talk on the importance of tithing, but of particular interest to me was what Elder Bednar noted as “Lesson 2.” Gave some great insights into how finances work within the Church at a general level. In his words, “I marvel at the clarity and brevity of these two revelations [D&C 119 and 120] in comparison to the complicated financial guidelines and administrative procedures used in so many organizations and governments around the world.”

Further, “the Church as an institution simply follows the same principles that are taught repeatedly to the members.”

With the many demands on the time and means of active Church members, why would anyone want to join? President Uchtdorf’s reasoning for why ours is “one of the fastest growing churches in the world” includes the following:

I found it personally gratifying that President Uchtdorf said that people leave the Church for various, complex reasons.

Sometimes we assume it is because they have been offended or leazy or sinful. Actually, it is not that simple. In fact there is not just one reason that applies to the variety of situations.

President Uchtdorf also openly acknowledged that “in nearly two hundred years of Church history … there hae been some things said and done that could cause people to question.”

As an Apostle of the Lord Jesus Christ and as one who has seen firsthand the councils and workings of this Church, I bear solemn wtness, that no decision of significance affecting this Church or its members is ever made without earnestly seeking the inspriation, guidance, and approbation of our Eternal Father. This is the Church of Jesus Christ. God will not allow His Church to drift from its appointed course nor fail to fulfill its divine destiny.

Always good advice: “doubt your doubts before you doubt your faith.” (See my ruminations on my faith.)

Outside the Conference Center

It is always interesting to visit General Conference, not only for the messages and counsel offered, but for the activities that occur on the sidewalks to the south of the Conference Center. There are generally a handful of “protesters” present, trying to dissuade the LDS attendees from living their religion.

The term “protesters” is my own; I have no doubt that those who make up this group would characterize themselves as such. Instead, they view themselves as preachers, spreading their version of the gospel to those whom they believe are deceived or decievers. In their preaching efforts they condemn their listeners to hell if they don’t listen to the message they shout.

I chose the term “protester” because of the preaching methods utilized by these individuals. They are generally “in your face” with their message, and their approach to the gospel contrasts remarkably with the message preached by those speaking in General Conference.

A frequent attender of General Conference, sharing his regard for our sacred temple clothing.