I was browsing through some old copies of Conference Report (which used to be published by the Church up until a couple of years ago) and ran across the following quote by President Joseph F. Smith. It struck my interest, and I thought it worth repeating: 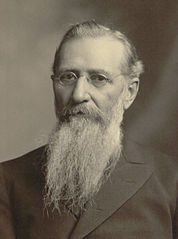 Circumstances are favorable to the remark I desire to make, that the Presidency and a number of the Apostles are beset, continually, with letters of inquiry, asking questions about almost numberless and nameless subjects. On one occasion, having been importuned by a young man who was almost a professional questioner, and having submitted to his queries, continuously, for a number of months, I came to the conclusion that I would make this proposition to him, and I think it is a good one to make here, because it is not always the Bishops, or the Bishops’ Counselors, or the Presidents of stakes who are asking questions of us, and who are submitting wonderful problems for us to solve; but many of the Latter-day Saints are doing the same thing, also a number who are not Latter-day Saints. My proposition was this, and I repeat it to the Bishops and Presidents and to the Latter-day Saints everywhere: If you have a question to ask, or some problem that you are not sure you are able to solve, I would suggest to you that you figure it out yourselves and reach the very best conclusion that you can of the matter; and then, if you are still not quite satisfied with it, and you cannot get sufficient of the Spirit of the Lord to reveal to you the absolute truth, as to whether you are right or wrong, just submit to us your conclusion, and we think we can answer that a good deal easier and quicker than we can solve your questions in the way they are generally put to us. (President Joseph F. Smith, April 1910 General Conference, Conference Report, pg. 45.)

Some who are critical of the Church get annoyed that the leaders won’t answer questions that the critics feel are important. President Smith suggested that they figure things out for themselves and then write the leaders with whatever it was they figured out. These days if someone writes to the First Presidency or Quorum of the Twelve, the questions are pushed back down to local leaders (the stake president) to handle. If the stake president deems that a question deserves “higher” attention and he cannot resolve it, then he may escalate the question back up the hierarchy.