In the category of double standards, there is a recent article on the Gay Star News blog about possibly the “worst tipper ever.” It seems that Dayna Morales, a server at the Gallop Asian Bistro in Bridgewater, New Jersey, served a family that did not leave her a tip on a $93.55 restaurant tab. In deciding to not leave the tip, the following message was left on the merchant copy of the charge slip:

I’m sorry, but I cannot tip because I do not agree with your lifestyle & how you live your life. 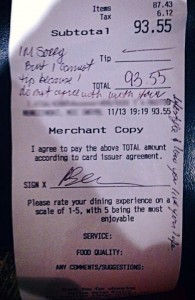 Morales summarized her Facebook post about the incident by saying she was “THOROUGHLY offended mad pissed off and hurt” and that whichever family member wrote the note should “keep your damn mouth shut and pray we never cross paths again.” On a follow-up comment she said that “it took very [sic] fiber of my being not to spit in their food and say something.” In reporting on the incident, the Huffington Post called the message “homophobic.”

Let me get this straight: It is permissible for a person to be labeled homophobic for not leaving a tip, but it is fine for gays to establish blacklists and call for boycotts (don’t forego just the tip, but the entire check) if a person contributed to the passage of Proposition 8 in California?

Can you say double standard?

The irony exemplified by the double standard would be head-shakingly sad, but what is really scary is that there are folks on the Gay Star News blog leaving comments such as the following:

It’s appalling behaviour. Unfortunately they’re not breaking any law but it underlines how wary we have to be around religious folk. They’re full of hate!

It is notable that the note-leaver never said anything about being “religious folk.” That is an assumption on the part of the commenter. Then there is this one which also stereotypes the note-leaver into the religious-folk category:

Further proof that religious people are subhuman, and we need to stop freaks like this bringing up children.

Why are such comments scary? If the comments had been turned around so the same words were directed at gays, would they then be considered homophobic? If the person explaining why a tip was not left is painted with the broad brush of bigotry, should those calling for extreme sanctions against religious people also be considered bigots?

If there were no double-standard at play, then one would think so.

I find the comment by the tipper hurtful, but I don’t think it rises to the level of homophobia. (It is helpful to remember the old maxim: Never attribute to malice what can be explained with stupidity.) I also understand the reaction of Morales; if I had been her I would also have been hurt by the insensitivity of the commenter. However I find the over-the-top comments left in support of Morales to go beyond hurtful and some should be clearly considered in the category of religious bigotry.

4 thoughts on “An Ironic Double Standard”