Last evening my wife and I went on a date (gotta love date night!) and decided to see Ender’s Game. This is actually a movie that I’ve been anticipating for quite a while. I used to read a lot of science fiction, and I always considered Ender’s Game, by Orson Scott Card, to be one of the best specimens of the genre out there. It won the two most prestigious awards for sci-fi writing, the Nebula Award (1985 best novel) and the Hugo Award (1986 best novel).

In fact, in preparation for the movie, I re-read Ender’s Game just about ten days ago. It is a quick read, and I was able to dedicate an entire day to reading it. (I love it when I can read a novel in a single sitting. My legs may be numb when done, but it feels good to read that intently for that long.) 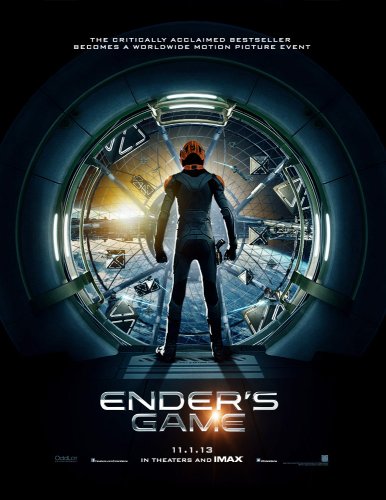 I knew going into the movie that it couldn’t do justice to the scope of the book. There is no way that a two-hour movie can cover the same amount of context, back-story, and character development that you can get in a book that covers years of a character’s life. I also understood that the film would need to make Ender older than in the book. (In the book he enters battle school at the age of 6; in the movie he is clearly in his teens.)

As I was watching the movie, I found myself continually “filling in gaps” with my remembrances of the back-story. In fact, at one point in the movie (can’t remember the exact scene) a person sitting next to me in the packed theater whispered to her companion—loudly enough for me to hear—”that whole part went right over me,” where I picked up on what was happening because I had previously read the book.

I suspect that some other people might have had the same experience a time or two, so I was particularly interested in my wife’s impressions. She is not a huge sci-fi fan and she has never read Ender’s Game. As we were talking after the movie, she said that she simply thought that they were rushing Ender extremely fast toward command status. (In the book, that process takes years; in the movie it takes a couple of months.) Other than that “rushed” feeling that she sensed, she did say that she enjoyed the story. She found it engaging and that it flowed well for her.

One thing that I missed in the movie that was much clearer in the book was the relationship between all the Wiggin children. Peter, Valentine, and Ender Wiggin all have different personalities that blossom and grow through the book, and none of that is in the movie. (Peter makes a single scene and Valentine appears in only two scenes.) The unmatched and unrivaled genius of the children, which sets them on differing but complementary life trajectories, is enjoyable to read and contemplate.

Casting in the movie is pretty good. It stars Harrison Ford as Colonel Graff, the manipulative, strategic-thinking, hard-nosed military man who runs the battle schools and recognizes Ender’s genius. At his side is Viola Davis as Major Anderson, who examines and considers, primarily, the psychological side of the exploitation of the children before and during battle school. The tensions between Graff and Anderson in the movie seem to illustrate the moral quandaries presented by developing the violent tendencies of children in service of a greater societal good. Ben Kingsley does an good job playing Mazer Rackham, a hero of the first bugger wars who swoops into command school and helps to finish Ender’s training.

The lead role—that of Andrew “Ender” Wiggin”—was played by Asa Butterfield, who also previously played lead roles in The Boy in the Striped Pajamas (which I absolutely loved) and Hugo. He did, I believe, a credible job as Ender, though he was not as multi-dimensional as I thought Ender was in the book.

All in all, I thought the movie was good. It did not—it could not—follow the book exactly, but it was a good “movification” of a great book. If you haven’t seen the movie, I would suggest you do so. If you haven’t read the book, then I highly encourage you to do so after you see the movie.