The topic of polygamy has always generated a prurient interest or curiosity in the non-Mormon population at large. This interest is most obvious among those in monogamous cultures, particularly those cultures with strong European influence.

This actually makes a bit of sense, as in the supposedly authoritative words of Wikipedia, “in the global context, acceptance of polygamy is common.” In the statistics cited at the source, only 15% of the cultures in the world are monogamous. Most cultures where polygamy is legal are located in Africa, the Middle East, and Asia (particularly southeast Asia).

The interest in polygamy within the United States invariably turns to the Mormons, who practiced it—both openly and not—between the early 1840s and early 1900s. Among some groups who trace their religious history to the Restoration, polygamy is still practiced. It is not currently practiced by those who belong to the mainstream Mormon church. In fact, if a person practices polygamy they cannot join the LDS church (regardless of whether it is accepted within the larger culture) and if a member starts to practice polygamy they are excommunicated from the LDS church. 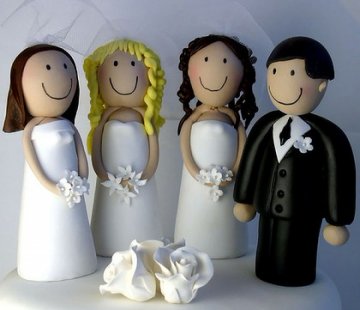 The peculiar interest in polygamy within Western cultures is evidenced by the increasing incidence of reality television shows focusing on the practice. Participants in one such television show, Sister Wives, brought federal suit against laws in the State of Utah that banned polygamy. Last week Clark Waddoups, a federal judge in Utah, struck down a portion of the Utah law, specifically the portion that prohibits “cohabitation.” The ruling, in the case of Brown v. Buhman, also effectively overturned significant portions of a 132-year-old precedent established by Reynolds v. United States. For me there are actually three fascinating things related to the Brown v. Buhman ruling—historical irony, social impetus, and social acceptance.

If anyone ever wonders how societies can change over time, this ruling presents a textbook example. The Utah law against cohabitation—which was the portion of the law struck down—have been in place since the time of Utah’s statehood in 1895, as a requirement by the federal government for that statehood. At the time polygamy was seen as a challenge to morality and civility, with the potential to bring down the entire US government. This feeling is true and is recounted again and again in the public efforts of the time to outlaw polygamy. The feelings were the basis for the Reynolds v. United States ruling which outlawed polygamy, as recounted again in last week’s decision in Brown v. Buhman.

In his decision, Judge Waddoups found it easier to dismiss the reasoning in Reynolds v. United States because of “the entrenched nature of an orientalist mindset among ruling elites” that crafted the decision and that incorporated attitudes of “racial inferiority” toward “Middle Eastern, African, and Asian cultures”—the very cultures that practiced and still practice polygamy.

One wonders what other reversals society will enact 135 years from now.

If anyone has been observing US culture over the past 50 years, they have no doubt seen the wholesale adoption of an “anything goes” attitude when it comes to forming relationships and families. With marriage rates at an all-time low and divorce rates at an all-time high, the majority of US males already practice “serial polygamy” by engaging in sustained sexual relationships with multiple women over the course of their lives.

When people can engage in such fluid relationships over time and still be considered fine examples of upstanding citizens, it is no wonder that laws relating to cohabitation would be found unconstitutional. Judge Waddoup’s reasoning that predominant attitudes formed a basis for Reynolds v. United States can also be seen in his decision to overturn portions of that precedent. Just as judges then were products of and influenced by their society, so are judges today.

It is not uncommon in today’s world to find people of both genders (but predominantly men) who actually do cohabitate and practice a form of polygamy. They may spend a few days with one family, move to another household for a few more days, and then repeat the cycle as they maintain multiple concurrent familial relationships. And while society may frown on such behavior, it certainly doesn’t prohibit it.

(I know of one never-LDS member of my extended family that kept two households for years. He was married in two different states and maintained the separate families secretly, so that one wife didn’t know about the other wife. The world called him a bigamist, but surely his experience would be fodder for a reality show and successful lawsuit in today’s legal climate.)

Laws are ineffective at proscribing morality. When significant numbers of citizens opt for a lifestyle that embraces or tolerates cohabitation, how can laws against cohabitation remain viable? The simple answer is that they cannot.

In the wake of the Brown v. Buhman decision, social commentators have become a bit more vocal in calling for a reappraisal of whether polygamy should be fully permitted under the law. One legal analyst stated on CNN that:

When the Supreme Court struck down the federal Defense of Marriage Act in U.S. v. Windsor in June, opening the door to federal recognition of same-sex marriage, it also set the stage for a discussion of plural marriage. …in calling DOMA definitions unconstitutionally restrictive, the court, perhaps unwittingly, also struck down the federal numerical limitation in a marriage, immediately re-opening the possibility of plural marriage at the state level. Activists have taken note, and are only getting louder.

The analyst argues that “going straight from criminalization to full recognition [of polygamy] is both the correct legal answer and necessary to assuage public fears” of the practice.

Some political commentators are also happy with the decision. In the words of the president of a Libertarian think tank (the Libertas Institute), “We welcome this ruling as another step in the direction of individual liberty.”

Even some entertainers, such as hip-hop artist and entrepreneur Akon, are starting to opine that polygamy might not be a bad thing. (There’s also actor Scott Thompson and several others that I won’t bother to list here.) Then there’s this post at Duke University that I’m not quite sure what to do with.

In a statement quoted by the Utah Daily Herald and other news outlets, the LDS spokesperson Cody Craynor said,

In fact, just a few days after the Brown v. Buhman decision the LDS church posted a new essay about polygamy on its website. It is definitely worth a read, as it succinctly and deftly recounts the history of LDS polygamy and reaffirms that “any person who practices plural marriage cannot become or remain a member of the Church.” The post is given kudos by noted non-Mormon historian Jan Shipps.

Some, but not all, of the historical details introduced in the article may be familiar to members of the Church. It has long been known, for instance, that President Wilford Woodruff stopped the general practice of plural marriage in 1890 with the issuance of what is known as the Manifesto, but not everyone may know that there were limited numbers of plural marriages that continued to be made through the year 1904.

I find, in particular, the closing paragraph of the Church’s essay to be instructive regarding the Mormons’ historical practice of polygamy:

For many who practiced it, plural marriage was a significant sacrifice. Despite the hardships some experienced, the faithfulness of those who practiced plural marriage continues to benefit the Church in innumerable ways. Through the lineage of these 19th-century Saints have come many Latter-day Saints who have been faithful to their gospel covenants as righteous mothers and fathers, loyal disciples of Jesus Christ, and devoted Church members, leaders, and missionaries. Although members of the contemporary Church are forbidden to practice plural marriage, modern Latter-day Saints honor and respect these pioneers who gave so much for their faith, families, and community.

With all this news related to polygamy coming about this past week, I can hardly wait to see what next week brings.