In yesterday’s installment about apologetics, I introduced three designations for people involved in online apologetics: apologists, seekers, and observers. As I stated, my purpose in doing so was for “convenience in understanding the interactions that take place in the field of online apologetics.”

I’ve received a couple of comments (via e-mail) from friends who said that, perhaps, my choice of the term “observer” was not as correct as it should be. In their view, a better classification system would be apologists, seekers, and critics. In light of their comments, I thought I would post this update about my usage of the term and why I chose it.

I understand the desire of labeling the people I call observers as “critics,” but I don’t feel that it is as helpful as my proposed classification system. Why? Because it (quite frankly) uses an oppositional approach to classification where apologists and critics are simply two sides of the same coin. In this approach, apologists are generally “pro belief” and critics are “anti belief.”

The world isn’t that simple, however. Remember that an apologist is a person who creates an apologetic. It doesn’t matter whether the apologetic is “pro” anything or “anti” anything; it is an argument (typically writing or verbiage of some sort) that provides a reason for a position and supporting information for that reasoning.

One cannot say, for example, that William Lane Craig is an apologist and the late Christopher Hitchens was a critic. Fact is, they are (or were) both apologists for opposite viewpoints. In the world of online Mormon-related apologetics, people such as Dan Peterson, Mike Ash, Dan Vogel, John Dehlin, Elden Watson, Grant Palmer, Stan Barker, Todd Compton, Kevin Barney, Matt Slick, and Rod Meldrum are all apologists—some supportive of Mormonism and others critical. (The list could go on and on.)

My approach to classifying participants is based upon what people do. Remember that apologists (pro or con) produce something. Observers, on the other hand, produce nothing substantive. They are either supportive or critical of something an apologist has done, but they don’t actually produce their own apologetics. (It is easy to criticize, praise, snipe, or troll—which is what observers do. This is the “cheap route,” requiring very little time or effort of the person.)

The choice of the word “observer” on my part was intentional, even though the choice runs the risk of causing a bit of confusion. When we think of an observer, we typically think of someone standing by and doing nothing but watching. They are neutral and benign to whatever it is they are observing.

That isn’t the way it is in the field of apologetics. Here observers usually doesn’t just watch, primarily because they aren’t neutral. As I mentioned in yesterday’s installment, they often are like rowdy soccer players, willing to jump into the fray and vociferously root for whoever their team is. (Typically “their team” is anyone with whom the observer ideologically agrees.)

Picture, if you will, a large room that is completely empty except for two people positioned in the center of the room. A spotlight illuminates them. One of these people is an apologist, explaining his or her position, and the other is a seeker, asking questions that elicits responses from the apologist. This is the historical, before-the-Internet paradigm of how apologetics worked. 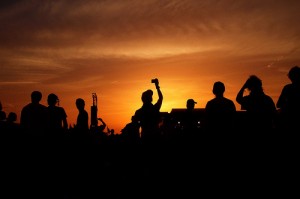 The observers are visible, but in the online world not always identifiable.

Now picture the same large room. In the middle are the same two people, illuminated by the same spotlight. Surrounding the people on all sides, in a circle, are hundreds and perhaps thousands of people, separated from the two in the center by about six feet. It is hard to tell exactly how many there are in the circle because the spotlight is the only illumination in the room, and as you get farther from the light source the people fade into the darkness. Some of the people in the circle are identifiable and others you don’t know. Still others are almost faceless because of the illumination issue. These are the observers, made possible because of the Internet.

Now imagine that the people in the circle are intently watching the two in the middle. One starts to say something but, after a sentence or two, is yelled at by another in the circle. Soon there are dozens and then scores of people in the circle talking and yelling. Most of their comments have to do with the points being raised by the people in the middle, but many times their comments are directed toward each other. Some of the comments are supportive of the apologist, but others are derogatory. In a few cases, in the dark recesses of the room, you are sure that you can hear people fighting.

In the world of online apologetics, because the observer produces nothing of apologetic value, he or she only serves to introduce noise into whatever conversation is occurring.

As I mentioned yesterday, if the seeker is not aware of what role the observer plays, it is easy to confuse the apologist as “just another participant” or come to believe that an observer is a substantive contributor to any conversation that may be sought. Neither is the case, however.

Is that harsh? It wasn’t meant to be. Is it descriptive of the state of online apologetics? I believe it is. Is there a better word to describe this third party on the field? If you can think of one, I’d love to hear it. (Feel free to comment, below.)

3 thoughts on “Observing the Observers”