I’ve never been a BYU student. At one time I went to the school now known as BYU Idaho, but that doesn’t mean I was a BYU student. On many fronts, at the time, we viewed BYU as our competitor, not as another manifestation of our alma mater.

Even so, I was interested this week by two widely divergent articles about BYU. Or, I should say, about the climate or attitudes that exist at BYU.

On Tuesday Damon Linker, a non-Mormon, wrote a fascinating piece for The Week entitled “Where are the Real Liberals on Campus?” In it he argues that true liberality is vanishing from our college campuses and universities, being replaced with intolerance. Linker states that “liberal education is often far from its best today.”

One problem is the epidemic of lazy moralism among a clamorous cohort of students and professors. When combined with the cravenness of university administrators out to protect their institutions from bad press at all costs, this faction has succeeded in getting a range of speakers to back out of (or to be disinvited from) delivering commencement addresses at several colleges this year.

But as The New York Times reported on Sunday, this is hardly the only intellectually stifling (and illiberal) trend sweeping across campuses these days. There’s also the growing demand among students for “trigger warnings” to protect them from readings and other assignments they may conceivably find overly challenging or disturbing.

The combination of crusading moral indignation and hypersensitive self-protectiveness has the potential to stamp out genuine liberalism at some schools, transforming them into institutions devoted to insulating students from provocation and free thinking rather than to exposing them to it. 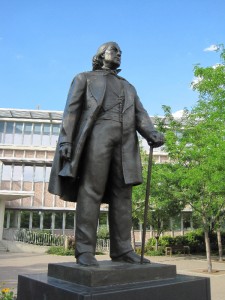 Linker then goes on to report his first-hand experience in teaching at BYU for two years, as a non-Mormon, where he experienced liberality because he “was perfectly free to teach whatever [he] wanted in the classroom.” The only stipulation, he reports, was that he not personally endorse those views. Linker reports that “was fine with me, since such an endorsement would have been a form of attempted indoctrination and therefore inimical to the liberal education I hoped to impart to my students.”

Now, contrast that with the second BYU-related article I read this week. This one was published the very next day by Jana Reiss over on her Flunking Sainthood blog on Religion News Service. The article, entitled “The Pain of Being Gay and Mormon at BYU,” looks at seeming progress for LBGT students at BYU.

Jana looks at the 2007 changes in the university Honor Code that removed the threat of expulsion for “simply being gay.” She particularly found heartening a 2010 video produced by USGA (the gay-straight alliance at BYU) and The Trevor Project.

Then Jana spends time (actually over half the article) detailing what she sees as the “confusion, isolation, and pain for LGBT students” at BYU. The prime evidence of this is an ill-worded survey the Church used to uncover perceptions among college-age Mormons. Jana also approvingly excerpts a quote from an article at The Daily Beast (“Mormon U. Forces Gays to Be Celibate“) that examines BYU’s Honor Code and gays.

Many LGBT students at BYU still take offense at the Honor Code restriction for various reasons. One of the first problems is with the language itself of “same-gender attraction.” Cary, who graduated from BYU in 2011, explains that “LDS Church leaders are counseled when they speak with young men and women who are gay to help them move away from calling themselves gay or lesbian to saying ‘I struggle with same-gender attractions.’”

Cary says the language choice both pathologizes homosexuality and makes it seem temporary, likening it to the doublespeak in George Orwell’s 1984. “It’s a 1984 word-making-reality thing because you’re not taking on an adjective. You’re taking on a condition that’s changeable. It’s the idea you weren’t created that way or it’s not immutable.”

I should note that Jana didn’t include the first two sentences in the above quote in her excerpt; I felt they were important for contextual reasons, which is why I included them here.

Certitude not withstanding, there are errors in Cary’s assertions. Some studies have indicated that homosexuality isn’t as immutable as many believe. The Institute for the Study of Sexual Identity at Regent University, while addressing the question “why do people experience same-sex attraction,” stated this, in part:

Further complicating the answer to this question is research suggesting that attractions change over time in both direction (toward the opposite- or same-sex) and intensity (Diamond, 2008; 2000; Jones & Yarhouse, 2007; Spitzer, 2003; Rosario, Schrimshaw, Hunter & Braun, 2006).

If feelings can change direction, are those feelings as immutable as Cary asserts? If studies demonstrate that immutability is, at best, an unsettled area, should one unquestioningly accept it as a foregone conclusion and endorse that thought to others as Jana does? Even though she affirmatively states that “homosexuality is not a phase someone is going through,” real-world studies show that for some individuals it may be a phase.

Jana then circles back to the 2010 video and makes what I find to be an unfortunate conclusion:

That’s not to say there is no “struggle” involved for LGBT Mormons. In this video, in fact, one of the students uses that exact term to describe her life.

But the struggle isn’t about her being attracted to women. It’s about her being misunderstood and marginalized by her religious community. And every time the Church subtly denies the reality of homosexuality as an identity and casts it instead as a “lifestyle choice,” that pain deepens.

In watching the video (which I very much enjoyed and recommend) the term “struggle” is used multiple times by those filmed. I believe, however, that Jana is referring to statements made by an unnamed student at 6:53 into the video:

I just found a lot of people that were supportive and willing to listen. And that eventually brought me to USGA at BYU where my community was strengthened even more. They also are struggling with the same issues of feeling rejected at Church and by their peers and their family. 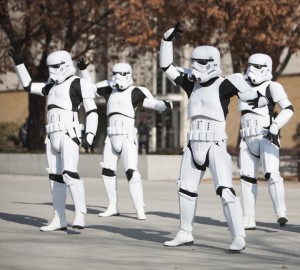 Some have a mistaken conception of those who enforce the BYU Honor Code.

From this Jana extrapolates that the struggle is imposed on the outside by the religious community on the individual. In other words, the unnamed student is a victim at the hands of the community. And if the community would only change to not “subtly deny the reality of homosexuality as an identity,” things would be better.

But that is not what is stated in the video. The unnamed student says that as a teen she struggled with her own identity. Every teen I’ve known (including myself) has, in coming of age, had to settle upon who or what they are. Those who come to terms with how they view themselves become well-adjusted adults; those who don’t continue to struggle with those feelings.

In fact, the student indicates what Jana characterizes as “misunderstanding and marginalization” was her perception, not the reality. The reality was that when she started to move past her perceptions, she found, at BYU, a community that strengthened her. This was reinforced by others in the video. At 7:22 Adam, another student, states “I decided to come out to some of my friends and they’ve been supportive, even here at BYU.” Right after that a similar statement is made by another student, Heather Waddington:

I don’t go to school with a bunch of hateful people. which is what I thought before; I thought I was surrounded by homophobic people that would hate me if they knew.

These aren’t innocents being victimized by their religious community. These are students who have discovered that the real problem was their perceptions and that there was acceptance and support within BYU. But you wouldn’t know it from Jana’s depiction. She portrays the glass as half empty, not half full. She sees victims where the supposed victims see hope and acceptance.

In summary, the reason that I found both articles interesting is that Damon Linker indicates that BYU is a place where liberality—in the classical sense—is thriving. Yet Jana Reiss (through endorsing Cary’s words) sees the Honor Code as “a 1984 word-making-reality thing,” which is the antithesis of liberality. This is the liberality that Linker admires:

I mean an older vision of liberalism—one rooted in the ancient virtue of liberality, meaning generosity and openness to difference. Including, for example, openness to traditionalist religious believers whose faith keeps them from affirming the legitimacy of gay marriage. When supporters of gay marriage denounce such believers as bigots, excommunicate them from civilized life, and get them fired from prominent jobs, they think and act illiberally.

It was apparent, at least to me, that Jana Reiss in encouraging and applauding those who would weaken the Church’s position on same-sex attraction is fully outside of the liberality that Linker finds worthwhile. I did, however, find a BYU student’s comment on Jana’s blog to be refreshing in its liberality:

Jana, I don’t know many people at BYU who currently believe that being gay is a “phase” that can simply be overcome. I would say that’s a minority viewpoint, and it’s a mischaracterization of our campus community to assume otherwise. I do have friends who are attracted to their same sex, and they anticipate being attracted to their same sex for the rest of their lives. That’s not what’s worth discussing. What is worth discussing is how as a covenant community, we support each other in keeping our covenants. And how we act with compassion toward those who find it difficult (not that anyone finds it easy) or who choose not to. This includes every member of our community, married, single, gay, or straight.

This is spot on—we need to be looking at how “we support each other in keeping our covenants.” That is liberal thinking in the true, classical sense.