Almost 20 years ago I lived in Cincinnati, Ohio, where I served in various callings in the local ward. When the bishop would ask my opinion on what should be done regarding some issue in the ward, I would provide my thoughts, then always close with “…but it’s your ward, bishop.” My thought, of course, was to remind him that he was the one in charge, it was his calling to make the decision, and I would support him in whatever that decision was.

Half a dozen years later I found myself in a leadership calling in Orem, Utah. In that calling I worked closely with the stake president. In one of our first encounters together he asked my opinion on a matter and I gave my thoughts. As in my previous encounters, I closed with “…but it’s your stake, president.” He turned to me, looked at me tenderly, and said “No, it isn’t. It’s the Lord’s stake.”

I learned an important lesson that day—a lesson I have reflected on quite often since then. True leaders humbly recognize that they are stewards for the real Master.

That lesson came to mind again yesterday evening in a personally powerful way. In the afternoon I drove to North Logan, Utah, to witness the vigil in support of John Dehlin as he attended his disciplinary council. 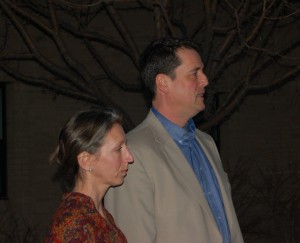 John Dehlin addresses those at the vigil with his wife, Margi, at his side.

At the appointed hour John arrived and briefly spoke words of thanks and encouragement to the roughly 200+ people that were gathered, along with two news crews. By 6:07 he was inside the building and on to the council.

Outside, the vigil’s organizer, Micah Nickolaisen, called the group to order. He invited someone to pray and then the group sang “Come, Come Ye Saints.” Micah then told his story about his faith crisis. Two other speakers (Richard Tripp, a personal friend of John, and Debra Jensen, a board member of Ordain Women) also expressed their appreciation and love for John. All three emotionally explained how John had personally and individually saved them. (All three literally used those words: that John had saved them.)

In traditional Mormon terms, I was witnessing a testimony meeting. It was a short one, though, ending with another song (“Choose the Right”) and devolving into respectful chit chat by 6:40.

The comment, however, that reminded me of my earlier experience with my stake president was one made by Micah in his remarks. He said that he understood that the Church needed to establish boundaries and determine who could rightfully be called a member of the organization. He also understood that we (the Church) were in a period of transition and that we (John and his supporters) deserved a place at the table as those boundaries were reevaluated. “That is,” he said, “all that John wants.”

To my mind, unbidden, came the thought “to whom does this Church belong?” I saw my stake president as he testified to me that the Church belonged to the Lord. It was in stark contrast to what I was hearing about deserving “a place at the table.” 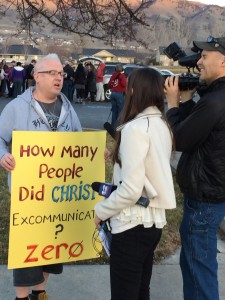 It struck me that I was, at that time, among 200+ people who didn’t have a firm understanding that the Church really, honestly, truly, actually does belong to the Lord. Most had problems with the concept that He would appear to and choose a flawed young man to restore His Church. They viewed the Church as a man-made organization that was deeply flawed, behind the times, and even, in the eyes of some, oppressive.

Richard Tripp stated during his remarks that he had come to a realization, thanks to John’s efforts, “that Mormonism is larger than the LDS Church.” It is, in his eyes, a nascent cultural identify, such as being Jewish. That sentiment struck me as one that many schismatic Mormon groups could also support.

In the traditional sense, the Dehlin supporters—those attending the vigil—had no testimony of the Church. I can’t speak as to whether they had testimonies of Christ; His name was not mentioned except on a single sign that questioned how many people Christ excommunicated. What these people were left with was a testimony of John Dehlin and what he—as opposed to the Church—had done for them. 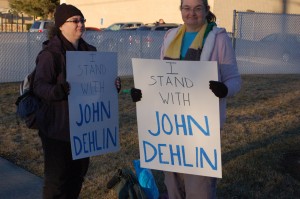 A common refrain over the past month has been “I stand with John Dehlin.” I’ve seen it over and over again on message boards and blogs. I heard it last evening and saw it on signs. I don’t know Bryan King, John’s stake president, but I’ve known many other stake presidents. If he is anything like those others, then I would be willing to wager that, if pressed, he would also say that he, too, stands with John, trying to support John not culturally, but spiritually.

Please don’t get me wrong; I am not finding fault with those who attended the vigil yesterday. It was clear, to me, that those attending loved John and supported him. It was also clear that John loved them. That display and exchange of love was a beautiful thing. It had a real emotional impact.

In his final thoughts, Micah Nickolaisen said, “We couldn’t get what we needed from in there,” pointing over his shoulder to the lighted vestibule of the stake center, “so [thanks to John] we found each other.” It was a thought that resonated well with the audience. Despite the emotional outpouring, it did not resonate well with me, as I know within every fiber of my being to whom this Church belongs.

53 thoughts on “To Whom Does this Church Belong?”