Those who know me understand that I have an odd hobby that I engage in from time to time—apologetics. (Or, more descriptively, defense of the faith.) One facet of that is that I often attend the LDS church’s General Conference, every April and October, to see what those who are most overtly vocal against our faith are up to.

You see, General Conference doesn’t just cause the LDS faithful to gather. It also draws some whose faith compels them to speak out against those whom they consider misguided, at best, and deceivers, at worst. 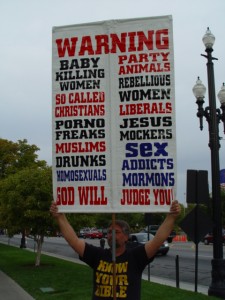 Collectively, those who gather have traditionally been referred to as protesters (for lack of a better word). It seems generally descriptive, as those who gather in this way are protesting against others—LDS faithful—who are gathering for conference. The most vociferous protesters for the past dozen years or so have been members of the Street Preachers’ Fellowship, a worldwide ministry to what they view as a fallen world.

Those are not the only protesters at conference, however; there are many more of all stripes coming from all over the country. I’ve met protesters from as close as Salt Lake City and as far away as New York and Florida.

The stock approach of the protesters is to somehow shock those attending conference. They shout epithets designed to get a rise and, according to those I’ve talked with, make people think about their condition before God and, ultimately, repent. The raucous preaching can seem disquieting to those who have not heard it before.

Verbally assaulting conference-goers isn’t all, of course. Most protesters carry signs, small and large, that they hope will convey a message. The message may deal with how mistaken the protesters consider faithful LDS, it may be a checklist of sinful acts, or it may be an overt call to repentance. Regardless, the purpose of the signs is the same as the shouting that goes on—to shock those in the crowds. 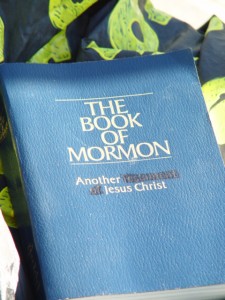 One of the most common tactics of the protesters is to demean sacred LDS scriptures (throwing them on the ground or defacing them) or LDS temple garments. Some protesters have their own sets of garments or temple clothing that they are prone to waving in the air as they shout things like “your magic underwear won’t save you, Mormons!” 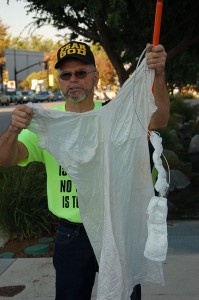 Shocking conference protesters aren’t the only ones who seek to demean those who wear garments. A decade ago it was a fad to sell garments on eBay. Sales continue through various unorthodox channels, even a sacrilegious site run by an ex-mormon. The term “magic underwear” has even made it into the Urban Dictionary:

Like most of the Mormon cult’s practices, magic underwear seems to be another poorly kept, weirdo secret.

Their magic underwear are worn under their real underwear. Picture a woman wearing a man’s T-shirt and boxer briefs under her bra and panties, and that’s the look.

They even sew embroidered patches into their magic undies, adding even more mystical, magical gibberish to the mix. 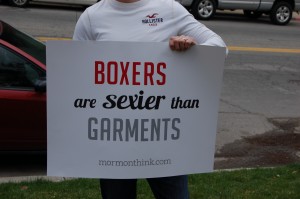 Temple garments provide an easy target for all sorts of people with an axe to grind against religion in general or the Church in particular. Devout Mormons simply shake their heads and wonder at the hoopla. (Indeed, this is the approach advocated by the Church even toward conference protesters: Signs on the grounds of the Conference Center say “As you enter and exit the Conference Center, please be courteous to those who may attempt to disrupt the special spirit of general conference.”)

I find it good news that the Church has just updated a page on their Newsroom website that is focused on temple garments. The page has been there for a few years, but what is updated is a brand new four-minute video that describes how temple garments and temple clothing fit into a larger universe of religious clothing.

The video is also directly available on YouTube. It shows both garments and temple clothes, as well as cassocks, prayer shawls, habits, and saffron robes. In the words of a point made in the video:

Some people incorrectly refer to temple garments as magical or magic underwear. These words are not only inaccurate, but also offensive to members of The Church of Jesus Christ of Latter-day Saints. There is nothing magical or mystical about temple garments, and Church members ask for the same degree of respect and sensitivity that would be afforded to any other faith by people of goodwill.

Given the wide use to which garment mockery has been put by many foes of the Church, I think the video is a welcome addition that should be shared far and wide.

One thought on “Temple Garments, Explained”