I was sitting in a business conference today, and for a few moments one participant embellished a discussion tangent by making the following statement about religion: 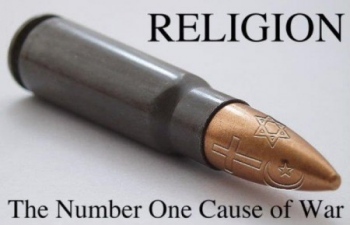 I’ve heard that statement before, but there was one thing interesting and one thing ironic about the statement. The interesting thing is that it was accepted by the other 20+ people in the room without comment. Granted, there may have been individual rejections of the comment by some attendees–as I mentally rejected it–but nobody, including me, verbally countered the statement. (Instead, I chose to write this blog post.)

So, what about the assertion? Has “every single war” had, at its root, religion? It is almost too easy to counter such an absolutist assertion, as a single contrary example disproves the premise. One only need to consider scholarly concepts of the bases of war to discover that religion is only one potential basis, the other two being power and economics. It would be a stretch, for instance, to contend that the American Revolution was “started by and about religion.” Countless others of the wars throughout history were demonstrably not about religion. For example, on the Wikipedia page entitled Causes of World War I the word “religion” doesn’t appear at all.

Of course, the original assertion about the causes of war could be made less falsifiable if it were recast without absolutist terms. Perhaps it is easier to sustain the assertion that not all, but most, wars are attributable to religion. Such assertions seem quite trendy in certain circles–particularly atheistic circles–but they are, at best, debatable and open to squabbles over definitions and evidentiary claims.

To me, assertions about the primacy of religious belief in the instigation of violence and war seems more a caricature or a stereotype than a principled, defensible position. If “critical thinking” is really at play, then one must dismiss such uncritical assertions out of hand.