Yesterday afternoon, about 1:50 pm, I received a phone call from a friend. She had just heard that a shared friend had collapsed at work and passed away suddenly, without any warning or indication.

There were also times—more than a few—in which we discussed and contemplated serious matters, of an eternal nature. I knew of his love for his wife and his children. I knew of his desires for them and to be the best he could be for them. I knew of why he had made the decisions he had that brought him to where he was. I knew of his plans for the future.

While I was bishop and while the Runias lived in our ward, Ryan served faithfully in many callings. Of particular note, Ryan served as a Sunday School teacher (for youth, of course), an assistant clerk, and later as ward clerk. At one point the Spirit directed that he be released as ward clerk and called as Scoutmaster and into the Young Men’s presidency. He was back, again, with the youth—a place where he seemed to particularly thrive. In all those callings (and more) he served with faith an excellence. 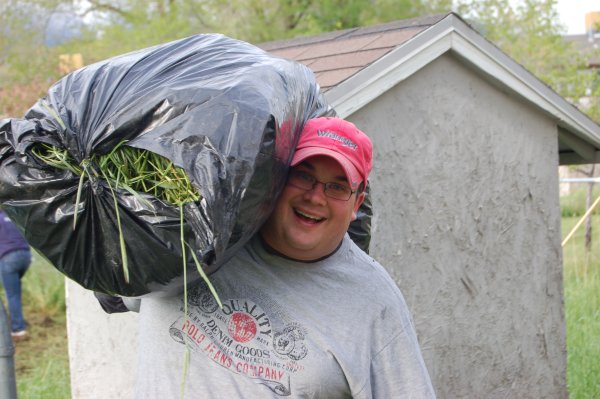 Ryan, helping others with humor and great attitude, in a 2011 youth service project.

As a bishop, I became attached to many people over the years. It was particularly easy to become attached to Ryan—I just found his personality one that was naturally attractive. Perhaps it was his sense of humor (which resonated with mine); perhaps it was his solid grounding in the gospel. Whatever it was, we seemed to gravitate toward each other from shortly after we first met.

It has been a few years since the Runias moved from our ward, and I was released as bishop of the ward about a year ago. Many, if not most, of the people I became attached to over my tenure as bishop—like the Runias—have moved from the ward and the neighborhood. Very few of those people attempted to make any contact with me after they left, even those who I tried to reach out to.

Ryan, however, was an exception. He would, periodically, contact me to see how I was doing. He would let me know that he was doing well. He was willing to come to our home and visit. I had the impression that he didn’t view me as a bishop, but as a friend. I looked forward to seeing him on those rare occasions when our paths would cross.

I can count on one hand the number of people who have extended that kindness to me, as Ryan did. I guess I understand why so few have—in their eyes I was their bishop and not, necessarily, their friend. Since it was different with Ryan, I expect to feel his loss for years to come. I carry with me many fond memories. I am nothing special, but the bond I felt with Ryan was special; it was real and tangible and eternal. He was and still is my friend.

As I write this there are tears in my eyes. I am saddened by the sudden loss of one so young, so promising, and so full of hope and desires for life. My heart aches for his family, left behind, and the loss they must now come to terms with. I struggle with what I can do to help assuage the grief that those closer to Ryan are experiencing.

Even in the midst of sadness and loss I do not feel despair. Hope does, indeed, spring eternal. I know Ryan understood that life is short and then we return home to our Father. I have no doubt that he is there, missing his earthly family and friends, but glad to be back “home.”

His departure, while premature, signals a separation that is only temporary. We shall see each other again, with outstretched arms and a welcoming embrace. The struggles of life behind us, I shall at that point greet Ryan with the famous words of Joseph Smith in my heart: “Come on, dear brother, since the war [of life] is past, for friends at first are friends again at last.”

I miss you, my friend.

9 thoughts on “Friends at First are Friends Again at Last”